Taiko Do – Echo Of The Soul 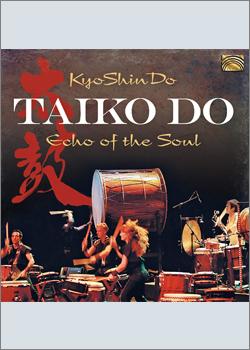 It makes for an enticing concept. Take a group of Italian percussionists, who just so happen to be karate experts too, and see what kind of musical concoction they can cook up. As Hirota Joji, who has been teaching the group for over ten years puts it, it’s ‘taiko with a martial arts touch’. The rhythmic, kinetic energy of the two disciplines would certainly seem to lend themselves to each-other, and for the group KyoShinDo, who have been active since 2003 when they came to one of Hirota’s concerts at Genoa’s Mediterranean Music Festival, their ambition has carried them relentlessly forward ever since. To say their dedication to the study of Japanese traditional arts is impressive would be an understatement, not only are they committed to playing taiko music, but they make the drums themselves – living and practising in a ‘dojo’ high in the Ligurian Apennines.

Opening track ‘Hinode’ (Sunrise) sets the scene here with immediate aplomb, reversed cymbals and plaintiff horns setting an ambiguous, unsettled atmosphere before a relentless, tightly percussive rhythm kicks into gear, punctuated by sharp vocal cries. Later, ‘Yuki Mau Mura’ (The Wind Snow Village) offers a wider palette of sounds, bringing in flutes and utilising a spread of percussive techniques to conjure up an entire soundscape of imagery. Keeping with the weather theme, the twinned pair of ‘Fuujin’ (God of Wind) and ‘Raijin’ (God of Thunder) teach us the subtleties in the texture of the taiko sound – at once light and agile, then suddenly heavy and meaty. The link to the natural imagery is an easy one; there is something fundamentally elemental about the sound of the taiko, something we would imagine the handcrafted nature of KyoShinDo’s instruments only amplifies further. These are sounds born of the earth, so it is only natural for the music to reflect its processes.

What really excites here though is that for all the taiko’s status as a traditional Japanese musical instrument, the material here seeks to constantly push it to its boundaries in a contemporary context. The musical ambition and imagination is tangible throughout, the awareness of the possibilities inherent in the range of sounds the instrument can generate – ranging from rich, woody tones to an almost metallic bite. The variety of rhythms is also impressive, with ‘Kazan’ (Volcano) in particular dazzling with an energy that hits like a volley of punches to the midriff. It feels almost like a cliche to visualise the cinematic scope of the music, but the sheer momentum of the material often feels like it’s only a short jump away from soundtracking your next favourite Hollywood action sequence.

With the majority of the tracks composed by KyoShinDo themselves, the album opens up interesting questions regarding how we can envision the creation of ‘Japanese’ music outside of Japan, and by non-Japanese players. Within this new transnational context, an instrument like the taiko morphs into a fantastic tool of innovation through which cross-border musical dialogues can project and amplify themselves. We all probably have an image in our heads of what taiko music sounds like (or should sound like), but here, KyoShinDo ask us to think again, to envision a tantalising ‘next step’ in the wider context of world music discourse.

Hirota’s previous release for ARC Music – on that occasion with longstanding collaborators, the London Taiko Drummers – felt like a masterclass of initiation for those unacquainted with taiko music. Musically speaking, it excelled in opening up the warmth and richness of sound that can come from the taiko as an instrument, as well as deftly balancing the essence of tradition with the inherent power of the taiko as a ‘performance art’. As an album, however, Echo of the Soul feels like a very different kind of effort – at every step more daring, more experimental, more tuned into the possibilities of the taiko as part of a continually evolving musical tradition stretching ahead into the future.

Once again, ARC Music deliver up an excellent spread of liner notes for the album. These include an introduction from Hirota himself, translations of the track titles and lyrics, as well as an ample spread of photos showing KyoShinDo in action. Full of sweating bodies, wide smiles and a palpable dynamism, they are evidence more than anything that taiko music is not only something to be heard, but to be experienced physically by the body itself. ‘Taiko is music worth listening to, watching, living,’ the notes explain, ‘(t)he music reaches the heart of the spectators, animating, rousing the primordial emotion of life’. Here then, perhaps, is the essence of taiko distilled most simply; this capacity to animate, to bring life into something staid and solid. KyoShinDo open up new imaginative avenues to the approach of sound as a conveyor of imagery, the physical and mental paired in tandem at the precise point a beat punctuates the silence.