The Only Gaijin In the Village 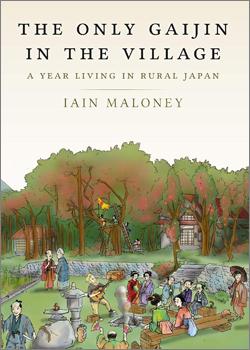 The title is one of the most important selling points of any written publication. Whilst The Only Gaijin In the Village is a humorous spin on a British sketch comedy, it doesn’t do justice to the wondrous tales that encompass it. The memoir spans across twelve years covering the life of a thirty-something year old Scotsman in rural Japan.

Like most travellers, Maloney has lived an unusual yet interesting life. After university, he travelled to various places before ending up in Japan teaching English. It is here that he meets his wife Minori, settles in its rural district and ultimately finds a sense of peace and contentment in a fast, ever-changing world. It is a fun and honest account of a young life and makes for a perfect read for the novice of Japanese culture.

The first thing to note is Maloney’s use of language; as a writer he is bold, humorous and current. Referencing British and American politics, rock music and Scottish and Japanese dialect, his descriptions are framed with an attitude keeping the reader on their toes. His move to rural Japan and desire to be self-sufficient is marred by expectations of ‘the good life’; he compares male rivalry and stupidity like the Wile E Coyote and acknowledges himself as a writer who is a ‘failed rock star.’ His talent is clearly wit and reflects his ability to take life with a pinch of salt.

He himself is a modern man – educated, bold, respectful of other cultures and open to new thought processes. This is most evident in his ability to tackle the reality of racism and xenophobia in both Scotland and Japan. Before deciding on fully settling in the East, he returns to Scotland with Minori – a no-nonsense psychiatric nurse. He highlights her difficulty in finding employment in Scotland with the ‘occasional racism’ and the difficulty of being a foreigner in Scotland overall. In Japan, instead of addressing it as “racism,” he explores the psychological aspect of human difference. As a foreigner, he knows that he will be treated differently (people might not sit near him on a crowded train or people may remain as “acquaintances” no matter how long they know him) but fully accepts this. He acknowledges his physical difference to Japanese people (6ft and blonde with a heavy build) but makes a conscious effort to tackle it by hosting garden parties, sharing food, music, gardening and welcoming community responsibilities. He embraces the Japanese language and it is this ability to grasp it and their traditions that essentially earns the respect and friendship of his neighbours.

Maloney has a strong sense of self-awareness which is evident throughout his life in all aspects. He acknowledges society’s label and difference between “expa” and “immigrant” and rejects this notion completely, proudly announcing himself as an immigrant – a heart-warming moment. He knows he is a foreigner and a settler – someone who has taken an appreciation of Japan, its culture, its people and its way of life – and has found a sense of contentment there. For Maloney ‘the first rule of living in Japan’ is to ‘show willingness’ and he is true personification of that in every sense of the word. As a gaijin he has embraced everything that Japan has to offer and presents it in a set of fun and authentic stories. He knows that no matter how long he remains in Japan, he will always be “foreign” – a concept that is changing but something he will always embrace and accept, whatever that means.