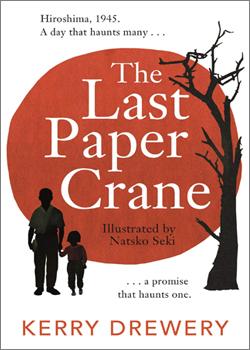 There is an interesting trend occurring in popular literature right now that one could reasonably approach as kind of writerly equivalent to the well-documented observation of so-called ‘dark tourism’ - the visiting of places historically associated with death and tragedy. Perhaps the most prominent example is the recent runaway success The Tattooist of Auschwitz and the numerous spin-offs and copy-cat releases that have followed in its wake. The atomic bombing of Hiroshima in 1945 has not been immune to this trend either, with the recent release of The Complete Story of Sadako Sasaki and the Thousand Paper Cranes, a slim tome aimed at middle-schoolers with an attractive manga-style cover that aims to retell the true-life story of Sasaki Sadako, the Japanese girl famous for folding one thousand origami cranes prior to her death from the aftereffects of the atomic bomb.

Kerry Drewery’s The Last Paper Crane at first glance finds itself slotting neatly alongside this kind of material, although the author is keen to note and acknowledge in the book's introduction the sensitivities around who has the right to retell these stories. Most interesting is her description of how her awareness of the subject was born, in fact, from a very British kind of atomic fear. Growing up in the Cold War climate of the 1980s, she writes about how her consumption of iconic atomic-themed narratives such as the TV movie Threads, David Bischoff’s WarGames, Raymond Brigg’s When the Wind Blows and even songs like Frankie Goes To Hollywood’s Two Tribes fostered an interest in the topic. 'Fear pushed me to try and understand,' she claims, before stating: 'I kept thinking that if stories are only told by people who were there, then gradually everything will fade from time and memory'. That may be so, but when there are already so many remarkably powerful documentations of the disaster across a wide variety of media formats, the question remains - what can this incarnation add to the wealth of material that currently exists?

The answer, it seems, lies in a combinatory approach. Told through an interweaving of haiku, free verse and standard prose, The Last Paper Crane delights in flitting between mediums in an attempt to convey the essence of the Hiroshima story beyond the simple historical facts. There is even a how-to guide and sheet of origami paper included in the back of the book so the reader can attempt to make their own paper crane. The guidance helpfully notes: ‘You will probably need to make several paper cranes before yours looks really good, so you might want to practice on plain paper’. As novel as the inclusion of this interactive element is however, it is the haiku that initially offer the most impact as the book lays out its opening gambit. A young Japanese woman, Mizuki, sits with her grandfather and discusses the importance of stories, of memories - how they offer a precious opportunity to glean insights into a past that will soon be lost to time: ‘Our memories weigh / Heavy on our soul, like leaves / On a dying tree’.

After just eighteen pages, the perspective shifts - narration nestled within narration. The central prose component of the book - told from the point of view of Mizuki’s grandfather - throws us almost immediately into the hot, white heat of the atomic blast itself and the terrors of the immediate aftermath. The question of how to handle the narrative significance of a historical certainty that we all know will occur has presented an interesting challenge to a multitude of writers and artists who have approached the story of Hiroshima. 2016’s critically-acclaimed anime feature film In This Corner of the World was notable in its masterful ‘teasing’ of the inevitable day, the days almost torturously unfurling, calendar-like as we warmed to the movie’s characters, all the while knowing the hardships that awaited them just around the corner. The Last Paper Crane’s decision to largely jump straight in to the impact of the bomb itself arguably means the opportunity for this kind of slow build is lost; the focus instead turned to the intensely personal reconciliation of the main character’s guilt over his actions after the bomb hits.

The tone of this prose segment is hard to judge. Perhaps it is the author’s background as a Young Adult writer that shows here, but the overriding feeling is an attempt to rewrite or recast John Hershey’s seminal Hiroshima into a guise suitable for a new, younger audience. The language is simple, blunt and unadorned - a symptom of its narrator’s youth perhaps, but then, this never held back Nakazawa Keiji’s peerless Barefoot Gen from the unimaginable devastation depicted in both its manga and anime incarnations. Beautiful as they are, the illustrations supplied by Seki Natsko here feel hushed and muted, a contemplative Hiroshima cast in silhouette. The most striking is three small, human-sized shadows laid out on a scratched, concrete backdrop. One is clearly a child, arms outstretched, angel-like. Projected in a stark monochrome of black and grey, this is a world sucked of all life. ‘They look like shadows of people’, we are told, ‘It’s as if their souls are stuck to the ground’.

This is the narrative of Hiroshima we have encountered again and again. But The Last Paper Crane is not without its surprises. The first arrives as our narrator passes out in the ashes of the ruined city, only to awake weeks later in a Tokyo hospital. He is tended to by a young Japanese-American nurse called Megumi, who informs her unbelieving patient that while he has been comatose, Japan has surrendered. While the existence of Megumi as a character within the plot feels a little contrived - is she merely a foil to articulate a point about America occupying Japan? - what is harder to digest is the sudden blossoming of romance between her and the narrator. This culminates in an impossibly soppy denouement as the narrator proclaims his undying love for her: ‘She is my friend, my girlfriend, my future hope, my sounding board, my compass when I’m lost, my shining light when times are dark. She is my everything, as I, I hope, am hers’.

The second surprise comes in the dawning realisation that throughout the book we have never known the name of its protagonist. When it is finally revealed, the narrative payoff is significant, and comes with all the weight caught up in the value of names themselves, as a personal identifier for a single individual, a survivor amidst countless lives rendered anonymous by the bomb. The book’s last surprise is saved for the final, and without a doubt strongest, third as the book returns to its free verse format for the final one hundred pages or so. The importance of this reveal is made obvious to readers well in advance, we know exactly what it will be, but this in many ways only adds to its resonance. While the book’s earlier flirtation with romance arguably falls flat, the emotional weight here feels genuine. What is most striking about this section is just how alive it feels in contrast to the staid, monochrome feel of the prose segment - the flow of the pages feels untethered, often with merely a single word per line, and we are quickly caught up in the sheer essence of pure, unfiltered emotional essence. The poeticism is striking in its energy; the rhythm enforced by the placement of the words on the page conjuring up a thrum of intensity that the book feels like it has been searching for from its very first page. Here, it finally finds it.

One is left wondering whether this is specifically a story about Hiroshima, or rather an intriguing authorial exercise in mixing artistic mediums, filtered through the lens of Hiroshima. While the narrative content of the book is questionable, its existence as a kind of poetic, artistic ‘object’ is fascinating - the author’s creative impulse moulded into a shape that just so happens to be designated ‘Hiroshima, 1945’. Ultimately, The Last Paper Crane feels impossible to pigeon hole. It is its own unique creation. A little rough round the edges perhaps, but thoroughly individual in its existence as a thing of many component folds and layers. There are many tales of Hiroshima. This is merely one of them.