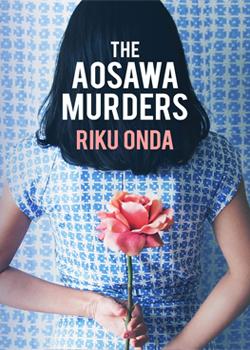 The first novel by prolific and award-winning author Onda Riku to be published in English is prefaced by a transcript of a police interview with Aosawa Hisako, the sole survivor of a mass murder that has claimed the rest of her family. Hisako, the obvious suspect, is blind; how could she have carried out a mass poisoning? The rest of the novel unfolds from this basic premise, following multiple viewpoints, a technique that recalls Akutawaga’s 1922 story In a Bamboo Grove, the inspiration for Kurosawa’s Rashomon.

The Aosawas, a prominent local family in an unnamed but atmospherically described coastal town, hold joint birthday celebrations for several family members. A gift of sake is delivered, along with soft drinks for the children, in the name of a friend of the family. The drinks are used for the birthday toast. A local girl, Saiga Makiko, and her two brothers arrive late to the celebrations and find a ghastly scene of writhing bodies and the stink of vomit. Seventeen people die. An extensive police investigation begins. The family friend has no connection to the delivery and the enquiry stalls. Then, a man known to be mentally disturbed hangs himself and leaves a suicide note claiming to have delivered the poisoned drinks. Despite the lack of motive, the evidence confirms his confession. The case is closed, and yet local people are left empty and dissatisfied, even ‘depressed’, because ‘they still couldn’t make sense of why all those people had died’ (p. 35). The logistics of the murder have been clarified, but the truth of it remains essentially unresolved, and at its centre is the blind Aosawa daughter Hisako and her memory of the old, dark, blue room.

As a young woman, Saiga Makiko is still haunted by her childhood discovery of the horrific crime scene. She is driven to return to her former hometown and research the murders as way of dealing with the trauma, which ‘was still with me, like a sediment that had settled deep down inside … Over time, this sense of unease built up and felt more solid’ (p. 19). She publishes a book about the murders, The Forgotten Festival, which she frankly describes as ‘fiction’: ‘Nobody knows what the truth is. It never even occurred to me to wonder if what I wrote was the truth’ (p. 23)’. In the first chapter, an older Makiko reflects on her experience at the time of the murders and the process of writing the book eleven years later, responding to questions posed by an unnamed interviewer.

The meandering narrative moves through conversations between people who are linked in various ways to the event and the interviewer, an excerpt from Makiko’s book, file notes and first-person reminiscences. There is no clear single point of view, although the reader has the impression that the mysterious interviewer is working through all the evidence at a much later date, as if piecing together an intricate puzzle. Every viewpoint is partial and open to question; does the passing of time blur memory or does distance from the emotional impact of events provide a clearer view? Onda seems to undermine the convention of (much, although by no means all) crime fiction that there is a truth to be neatly revealed, whether by logical deduction, old-fashioned shoe-leather or fancy forensic techniques. The truth of a murder, she seems to say, goes much deeper than simply who did it.