Stranger in the Shogun’s City 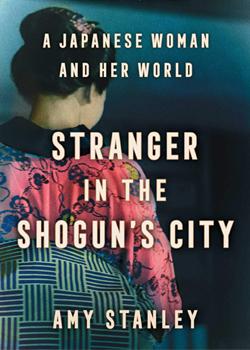 How to measure the value of one seemingly unimportant life? This is the question asked by Amy Stanley in a book that very much sees the lives of cities as inextricably linked to their inhabitants. Popularist histories are no rarity these days - the likes of Simon Schama and Mary Beard have thrilled many with the accessibility afforded by their peeling back the veneers of the past to unveil the messy, gritty reality of days gone by. So in this sense, Stanley’s decision to free her study of nineteenth century Tokyo (Edo) from the dryness of a more straight-up academic tome feels like a wise one; instead she uses archival work as a foundation to then paint in a more fully realised narrative world around it.

A graduate of Harvard and now an associate professor at Northwestern University in Evanston, Illinois, Stanley’s scholarship is impeccable (indeed, the references here run to fifteen pages in length). But a book of this nature requires something more, and in a field littered with countless histories of Japan, what marks her particular tale out is that it fights, tooth and nail, to reclaim the lives of the ‘little people’ from historical oblivion. Instead of the great men - the politicians, the generals, the deal-makers - we are given one woman: Tsuneno.

From her origins in Japan’s countryside to her life as part of the hustle and bustle of Edo, we are offered a glimpse of Tsuneno’s constant struggles in the face of adversity. These are often practical and financial in nature - how to survive amidst squalour, poverty and a succession of difficult jobs. But they are also deeply personal; Tsuneno goes through three ill-fated marriages, and through the letters she writes and the notably modern, feminist lens that Stanley’s study takes, we are given a flavour of the almost incomprehensible weight of societal pressure women in nineteenth century Japan had to contend with. This strong feminist angle - re-orienting us toward areas that would simply be overlooked in other histories - is refreshing in its newness and enthusiasm, though its desire to assess a world some two-hundred years in the past by the values of today often throws up glaring tonal inconsistencies; something the author readily acknowledges as a difficult exercise.

Tsuneno is a hard character to like. We are told again and again of her rebellious, discontented nature; her constant dissatisfaction with the world around her. Her journey is constantly in motion, always moving toward a goal of betterment that, unfortunately, never comes. Instead, she faces back-breaking poverty and a cruel, unforgiving world. Most of the letters presented from her are to her family back home in the countryside - almost all are desperate pleas for clothes and sundries. We often don’t get more of her inner voice than this, and as such, while she may never feel fully realised as a dramatic character, the morsels we are given shine a light on how important it is for us to acknowledge the existence of her and countless other women like her within history. These letters are more than simply documentation - they are a paper chain that breathes energy into the lives of others orbiting around her, the seeds by which we might grow a fuller portrait of one of the world’s great cities.

Seen in this way, Stranger in the Shogun’s City succeeds far more as an outright love letter to Edo - encyclopedic in nature, stuffed to the rafters with the vast panoply of delights (and horrors) available there. From theatre to food, the countless descriptions of the city are richly atmospheric and evocative of the era. A fascinating account in chapter three tells us just how much the city depended on the complex economics of the rice market. This runs in tandem with a later description of the other kinds of commerce happening in Edo, from the humblest rag peddler to the big conglomerate-driven department stores, many of which exist to this day. The book makes the wise decision to translate terms like koku (rice bales) and ryo (gold pieces) - so frequently used in prior histories of Japan - into English, making these economic descriptions more accessible and relatable to the lay reader.

These are highlights, however, and one of the book’s most frustrating faults is that for far too much of its length, it is plagued by a density to the prose that is almost overwhelming in terms of the sheer amount of information it attempts to force down the reader’s throat. This is further afflicted by the meandering nature of its delivery - while the book’s nine chapters chronologically map out the life of Tsuneno against the backdrop of Edo, the themes discussed sway wildly within these chapters, and they often feel like they are crying out for some clarifying sub-headings or simply some shorter, punchier paragraphs. The book ends up an uneasy halfway house - too dense to serve as a truly pleasurable popularist read, too scattershot to work as sober reference material. A far better recent attempt at the same kind of ‘narrative-isation’ of Japanese history was Christopher Harding’s Japan Story: In Search of a Nation, 1850 to the Present; which felt infinitely sharper and smarter in its presentation of concise vignettes to illustrate broader historical points.

At best, Stanley’s book merely muddles what could have been riveting material. And make no mistake, there are some truly beautiful passages here. An elegiac ending which casts the brevity and hardship of Tsuneno’s life (as well as some of her longer lived contemporaries) against the ‘opening’ of Japan to the West captures the poignancy of the immense societal changes they would have seen within the span of a single generation. But these glimmers of brilliance are all too often lost amidst the informational bloat surrounding them. If the nineteenth century could have had rolling twenty-four hour news channels, they might have felt a little bit like this. At worst - the ill-judged prologue and epilogue spring to mind, which put the author themself centre stage in their own narrative - the tone of the book feels needlessly breathless and overwritten.

There is a vital, important story to be told here. And the book's attempts to open it up to a wider audience makes it all the more admirable. But the fact remains that Tsuneno's story is heavy going - caught up in its own excitement, Stranger in the Shogun’s City can often feel claustrophobic in its intensity, clamouring to make its message heard amidst a relentless din of background noise. But perhaps, like Edo itself, that is the whole point.