Kimono Couture: The Beauty of Chiso 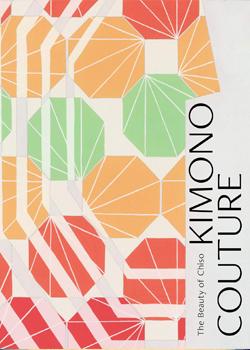 By Vivian Li and Christine Starkman

Being widely regarded as Japan’s national dress, kimono have attracted the attention of both domestic and overseas audiences at various points in time. Particularly the opening of the ports of Japan to foreign trade in the 1860s brought about the Japonisme craze, with kimono, among other pieces of Japanese arts and crafts, being exhibited at events around the globe, inspiring a new audience outside the borders of Japan. With the Tokyo Olympics being held in 2021, there once again seems to be a heightened interest in the garment of late, with major exhibitions, such as the Victoria and Albert Museum’s Kimono: Kyoto to Catwalk, aiming to re-tell the story of kimono. The Worcester Art Museum’s Kimono Couture: The Beauty of Chiso is the latest addition to this line-up, bringing in a fresh view by exploring the contemporary art practices behind kimono. The exhibition had to be re-scheduled to later in the year, but the accompanying catalogue is now available.

Kimono Couture: The Beauty of Chiso mainly focuses on the crafting practices behind kimono, telling the history of kimono from the view of one of Japan’s oldest kimono houses still existing today, Chiso. Chiso was founded in 1555 as a trading company specialising in Buddhist vestments / robes by Nishimura Sengiriya Yozaemon, and later became a key supplier of decorated textiles and kimono to the imperial household. It was particularly Chiso’s signature yuzen paste-resist dyeing technique, making each item appear delicately hand painted, which caught the attention of both members of the imperial household as well as fashionable individuals. During the Meiji period, the company started collaborating with nihonga (Japanese-style painting) artists to create new designs and patterns, benefitting both the company as well as guaranteeing the continued appreciation of labour- and time-intense techniques and skills. Even today, Chiso remains committed to their vast network of 600 artisans, aiming to assist weavers and dyers in their survival by venturing into new, previously unexplored territories. Following this line, the collaboration with an art institution like the Worcester Art Museum was a first for Chiso, and resulted in the commission of a wedding kimono specifically designed for the Worcester Art Museum.

A particular highlight of the catalogue is consequently the interview with Chiso’s senior designer Imai Atsuhiro, providing readers with a detailed insight into the creative process behind the commissioned kimono. Imai visited Worcester in 2019 and got inspired by one of the suggested themes for the kimono’s design, the ‘Seven Hills’ of Worcester: ‘The rich nature surrounding us became an inspiration for the designs, motifs, colours, and so forth. People have always looked to nature for inspiration, and that is no different with kimono design’(p. 47). To capture nature with its seasonal changes, Imai designed an abstract, all-over pattern based on octagonal shapes which represent maple leaves and also refers to the Chiso brand’s trademark. It was additionally the number seven which served as an inspiration, with the design incorporating seven gradations of colours, as well as seven different dying and embroidery techniques. Imai was also highly aware of the characteristic of kimono as both a piece of art and a material garment which is meant to be placed on the body: ‘The kimono is sumptuous when its spread out; it has a different beauty when it’s worn. In this kimono the two halves of an octagon come together to form one octagon at the front [when it’s worn]. One half represents Chiso, the other half represents Worcester – it expresses a bond between the two places’ (p. 49).

This bond can be felt through the catalogue, which is itself a brilliant resource for anyone interested in kimono. Presenting informative background information to the exhibition, it features 84 images which, besides depicting the fourteen Chiso kimono displayed in the exhibition, provide a visual insight into the design process; a variety of sketches and photographs depicting the process of creating the kimono, as well as close-ups of the designs and patterns all illustrate the design process as discussed in Imai's interview. I additionally personally very much appreciated the inclusion of photographs of Iida Taka, Nishimura Tokoku and Kawakami Masako, some of the women of the Nishimura household, wearing their commissioned kimono to once again illustrate the importance of kimono not just as a piece of art, but also wearable clothing. Besides these visual materials, the catalogue includes a number of informative essays, such as a discussion by Viviane Li and Christine D. Starkman’s, the two curators behind the exhibition, on the role of kimono in contemporary Japan, as well as articles by Japanese art and textile experts Ryo Kikuchi and Yukio Lippit which further delve into the world of Japanese textiles.

Overall, the catalogue to the Worcester Art Museum Kimono Couture: The Beauty of Chiso adds to the current discussion on kimono by narrating it not as purely as a traditional costume, but as a fashionable and diverse garment which had to overcome many obstacles and adapt to different historical circumstances in a variety of ways. The overall presentation within the exhibition catalogue is both inspirational and educational, and should therefore be added to the personal library of anyone with an interest in textiles, art and crafts.

High-resolution images of some of the kimono distributed by the museum are available here.