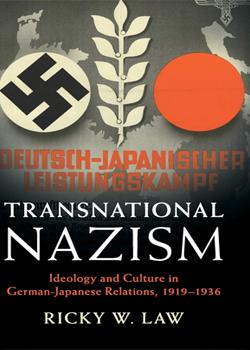 It is really difficult to say anything new when the topic has been analysed and scrutinised from almost every possible angle. Such is the case of the history of the Axis and the experiences of Italy, Germany and Japan in the first half of the 20th century. Yet Ricky Law has produced a remarkable monograph that aims to move forward our understanding of the relationship between the two countries by providing a fresh perspective from outside the palaces of power. Law’s research should be contextualised within the broader emerging scholarly body of histories of Nazism and fascisms analysed from transnational and global perspectives.[1] This new scholarship has seen fascism, Nazism and imperialism as closely connected phenomena. Such processes are not anymore studied from the perspectives of the nation-states, but a new focus has been put upon global exchanges and interactions among supporters of these ideologies. Empires and nations are thus seen through a new framework that would, supposedly, bring more clarity to the “external” factors that led to the emergences of ultra-nationalist and imperialist solidarities across the globe.

Transnational Nazism is a cultural history of German-Japanese relations during the interwar era from the standpoint of their civil societies. It is crucial to highlight that ‘public discourse and perceptions mattered in interwar Japanese-German relations because few could afford firsthand interactions’ (p.2). The high costs of transportation and the considerable time needed to travel between Germany and Japan made personal experiences of movement between the two countries, and knowledge of these countries, specific forms of social and cultural capital. Furthermore, the emergence of printed and visual media helped spread and the popularisation of certain ideas promulgated by these groups of “experts”.

Law analyses a conspicuous number of primary sources in both German and Japanese from newspapers to movies, nonfiction books and academic lectures. While these types of sources have been the bread and butter of cultural historians, the author cleverly adds language textbooks and documents from voluntary associations to provide a more nuanced perspective. The sources catered a wide range of strata within the German and Japanese civil societies from students and workers to the more affluent middle class. One of the most interesting information that we can extract from Law’s study is, in fact, how groups negotiated transnational Nazism and how their perception always mutated over time.

This monograph sprung from the awareness that there still are significant gaps in our knowledge of German-Japanese interactions. While the Meiji era, WWI and the post-1936 (when the two nations signed the Anti-Comintern Pact) period are well documented in terms of cultural and diplomatic exchanges, the interwar period is peculiarly lacking. If we look away from state-to-state interactions, the book holds, we can find a vibrant community of German and Japanese intellectuals, journalists and educators were in a privileged position to cultivate and disseminate knowledge about Japan and Germany in their respective countries.

But what exactly is “transnational Nazism”? According to Law, it is an ideological outlook composed by two main angles. The German strand of transnational Nazism enabled Germans to incorporate into their heavily racialised world-view non-Aryan people like the Japanese. The perceived Japanese racial purity and its accomplishments as a “modern nation” made Japan a welcome party in the Nazi world. Conversely, the Japanese strand of transnational Nazism demonstrated how non-Germans understood and appropriated Nazism. Law points out that once Nazism travelled across national boundaries, it was moulded into another body of knowledge influenced by local specificities. In other words, Japanese commentators and scholars reshaped Nazism into a palatable ideology for the Japanese public, still centred on the image of Hitler and national-socialism, yet somehow less racialised that its original version.
However, as Law very interesting demonstrates, interwar relations between Japanese and Germans were very unequal. In Japanese cinemas, newsstands and bookstores the market and interest for German-related intellectual and material commodities was far more variegated and developed than Japan-related books, movies and goods in Germany. More crucially, for many Japanese to learn German had specific ideological and practical connotations. To “conquer” German meant to become more civilized, as well as enabling up-ward social mobility and access to restricted intellectual and pollical circles (p. 144). Needless to say, Japanese did not have the same level of cultural and social capital in German culture.

The book is divided in two main sections broadly structured around the primary source used for each chapter. The first section is dedicated to Transnational Nazism in Japan and the representation of Germany across several media. The second focuses upon the representation of Japan in German sources. In symmetric fashion, Chapters 1 and 5 analyse newspapers; chapters 3 and 7 instead have as central source nonfiction books. The rest of the chapters are more variegated. Law analyses representations of Germany in lectures and pamphlets (chapter 2), as well as language textbooks (chapter 4) in Japan, while he uses films (chapter 6) and voluntary associations’ records (chapter 8) to better comprehend how Japan was translated for a German audience.

Transnational Nazism shines an important light upon how the German and Japanese civil societies were able to maintain crucial ties in a moment when diplomacy was almost completely absent. Ultimately, this is a book that enables us to see beyond state-centred narratives and it helps us understand how ideas circulate and evolve across social strata.

However, while we can easily understand “transnational Nazism” through the practices and exchanges of these groups, it is arguably harder to distinguish how this new terminology might further our knowledge of the topic. Perhaps, the book would have benefited a more systematic theorisation of what “transnational Nazism” is and how it differs from the other tools that historians have used until now.