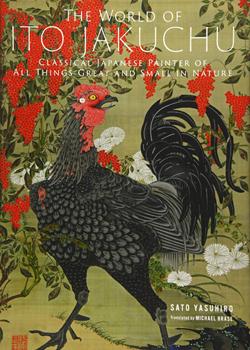 For those beyond the cloistered world of Japanese art history, the concept of “Japanese art” in and of itself remains unavoidably dominated by a preponderance toward the big names. With the likes of Hokusai and his eternally famous The Great Wave off Kanagawa more popular now than ever before, what hope for the considerable wealth of great historic talent that is largely unknown amongst non-expert crowds outside of Japan’s borders?

This timely volume, originally released in 2006 in Japan but only now translated into English, sets forth the case for Edo-era painter Ito Jakuchu (1716-1800), with author Sato Yasuhiro - a longtime expert on Japanese fine art and former Professor at the University of Tokyo - beginning proceedings with an impassioned preface that speaks of Jakuchu’s ‘thousand year’ wait for recognition. It is a wait that, slowly but surely, has been rewarded. Standout showcases in New York and Los Angeles in 1989-90 marked a first for Japan’s Agency of Cultural Affairs - never before had they sponsored the exhibition of an individual Japanese artist abroad. The success of these exhibitions would eventually prompt a re-appraisal of Jakuchu’s work - long dismissed as eccentric in style - amongst domestic audiences in Japan too.

The eldest son of a vegetable wholesaler in central Kyoto, Jakuchu’s grounding within the world of natural produce as part of hectic market that exists in the city to this day would give him a firm foundation for the kind of precise observation of nature’s many bounties that would come to define his artworks. Sato's overview of Jakuchu’s life and works - ably and sensitively translated by Michael Brase - is warmly cordial; acting as a relaxing, knowledgeable guide to the paintings. While there is absolutely the detail here for an academic audience too (the closing essay included at the end of this volume will be of particular interest, locating Jakuchu’s work within broader discussions of Edo-era art), for the most part the writing is refreshing in its comforting casualness, and is just as easily accessible to newcomers to the subject.

Early on, we get a taste of the full majesty Jakuchu was capable of conjuring up within his favoured colour-on-silk medium in Peonies and Lilies. The finesse and attention to detail in this capturing of verdant flora is self-evident in its appeal to the senses. The detailed realism and rich colours would become trademarks of Jakuchu's style, extending to remarkable depictions of birds in particular (but also including dogs, fish, monkeys, insects and lizards). From chickens to cranes, Jakuchu's ability to capture the delicacy and intricacy of feathers and dramatic body shapes is a sheer delight to behold.

For all this microscopic detail though, the claims of eccentricity may have something to them - there is a barely restrained wildness to Jakuchu's style that feels almost psychedelic at times. Colours collide and mingle with abandon, and for all their obvious beauty, these artworks never allow the viewer to forget that they are observing nature in its most primal, untameable form. In Phoenixes and the Rising Sun - a powerful diversion into the fantastical - we are served a particularly strong illustration of this. Jakuchu's command of colour is such that even predominantly white paintings - snowy scenes, or meticulous depictions of plum blossom - glow with an almost ethereal beauty. It is not just the blank non-colour of 'white' we observe but something richer and somehow more effervescent. In all cases, Jakuchu imbues colour with a palpable life force, a cramming full of the very stuff of nature itself. Tree branches and waves seem to almost push out of the paintings and extend their tendrils toward the viewer.

Much of the book is naturally devoted to Jakuchu's masterwork - Colourful Realm of Living Beings (Doshoku sai-e) - a thirty scroll sequence donated by the artist to Kyoto's Shokokuji temple in 1765. By this point in his career, Jakuchu very much saw himself as an authority within his field, and the sheer accomplishment of this collection is undoubtedly impressive. His beloved birds naturally dominate yet again, the roosters here looking more ecstatic than ever. A particular standout from the series sees a mass of swallows descending, hordlike, to feast on fields of autumn millet. A lone white bird punctuates the press of predominantly brown bodies. The book notes, with some humour, the inadvertent Hitchcockian flavour of the composition.

Casting Jakuchu's output as part of a far wider tradition of East Asian bird-and-flower painting, with a particularly strong Chinese influence, the book's middle pages take us closer to the finer details of his work. Here, we observe in microscopic detail the exact finesse of individual brush marks; Jakuchu's technical capability laid plain in a kind of ‘this is how he did it!’ expose. Close up, many of the strokes have the feel of optical illusions, abstract and Escher-like in their clustered formations. It is only when we zoom back out that we can marvel at how these very same details infuse the paintings with such life. The latter portions of the book broaden the field - we are shown how Jakuchu also worked within the mediums of ink painting and woodblock prints. While these works may lack some of the vibrancy and instant visual appeal of the earlier, more colourful compositions, they are a testament to the artist's versatility. One striking example - only recently discovered - done in ink and composed when Jakuchu was in his eighties, shows a monstrous white elephant facing off against a whale. The effect is terrifying in its stark, monochrome surreality.

For those now thoroughly convinced of the wonders of Jakuchu’s work, a handy index at the rear of the book usefully details those museums - both in Japan and abroad - that hold Jakuchu material in their collections. As an aside, casting a cursory eye over this list, the reader is offered a glimpse of the fascinating disparities in museum curatorial culture present between Japan and international institutions. For all that Jakuchu is a Japanese artist, his works are invariably flagged as being, at best, 'sometimes on display' in many of the Japanese institutions listed - an elusiveness at odds with the seeming permanency of many Western art collections.

That said, it is worth noting that befitting a Japanese publisher, the production quality of this book is of a very high standard; printed on luxurious-feeling paper that allows the colours to quite literally pop from every page. For a tome dedicated to the creator of Colourful Realm of Living Beings, this feels quite appropriate. Done up in a handsomely glossy hardcover finish, this book would no doubt make a welcome gift to any aficionado of Japanese art, and to the animal lovers among them, even more so.