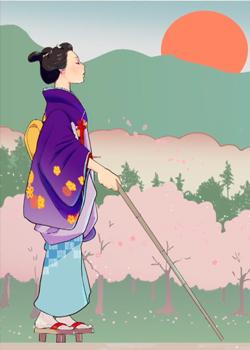 Until I watched the stage version at Stratford Circus last year, I had never seen a theatre production performed entirely by visually-impaired artists. The skill of all the artists involved is simply staggering and the experience was transformative.

Key to the narrative are the goze, visually-impaired female shamisen players who would travel around Japan playing music and retelling epic tales. These performers were first referred to in 15th-century Japanese literature, according to Professor Kojiro Hirose, an expert in goze studies.

The peripatetic goze would often travel for about 300 days of the year.

Taki, a Japanese goze guide wearing a purple kimono and carrying a shamisen, meets audience members as they log on to the online production. She waits for them at a crossroads or runway and prompts the audience to choose their first path, at the push of an arrow, be it North, East, South or West. Believe me, you can’t go wrong whichever path you take, so do not agonise over the decision. I tested it countless times!

Taki provides plenty of context throughout and often relies on her teacher, Sugimoto Kikue, to add a number of short, informative lessons about the goze and their craft. Each section takes about 15 minutes and the whole experience lasts about an hour.

I began with West, which took me to ’where old meets new’. On stage were Amelia and Sarah – global citizens - both with rucksacks and holding walking canes. Close to them were two aerial silks rigged from the ceiling, each silk consisting of two lengths of fabric. Amelia and Sarah are incredibly down to earth, opinionated, funny, able storytellers and, as it turns out, enviably supple. They are virtually impaired female artists on the move - contemporary goze.

They are joined on stage by Kikuchi Takashi, a visually impaired viola player, and Victoria Oruwari, a visually impaired soprano singer. Takashi and Victoria are not on stage themselves, but we hear their voices, and occasionally see videos of these very talented musicians. Takashi’s presence is captivating even though he is not physically on stage. Victoria considers herself to be six years old – the last age at which she could see. She sings beautifully.

Stories are brilliantly melded together and move between the different characters, so one has to stay alert. The stories are personal and contemporary.

On the silks, Sarah learns some spectacularly hair-raising moves from Amelia through repetition and muscle memory. I was on the edge of my seat. The learning from repetition is similar to how the goze would learn their craft, though their training lasted five years.

I suddenly hear the clash of metal and samurai, as I’m plunged into the magical story of Hōichi - a blind and earless biwa or lute player - as retold by Lafcadio Hearn, another restless traveller of Greek and Irish heritage who ended up in Japan in the late 19th century. Hōichi – voiced by Takashi – helps bring to life the Tale of the Heike, an account of the 12th century struggle between the Heike and Genji families for control of Japan. The sea rages and the ghostly fires of the dead Heike burn all around.

Meanwhile, Sarah and Amelia continue to entertain. They pull themselves up on the silks, tip themselves upside down, do the splits, pull off a sideways pose, a plank, a figurehead and more. The repertoire is fast and breath-taking too. A series of shamisen jingles can be heard in the background.

These two modern-day goze have bags of energy and, I imagine, lots of travelling, living and sharing of stories to fulfil!

As the spectacle comes to an end, Taki moves from the flight path back to the crossroads, where it all begins again. Did I mention that she is an animated character?

Nakamura Aya as Taki is the perfect guide: soothing, entertaining, encouraging and informative – a good balance to the didactic teacher. The animation is utterly beguiling, and something that the Artistic Director of Extant, Maria Oshodi had wanted to include in the 2019 stage version. The illustrations for this online version were drawn by manga artist Inko Ai Takita, and the animator is Dave Packer. The shamisen music by the talented Ichikawa Hibiki – who collaborated with Dario Marianelli on the soundtrack of the film 'Kubo and the Two Strings' makes for a beautiful soundtrack. Nic Sandiland, as Editor and Producer, worked tirelessly to seamlessly pull everything together and Tim Jukes, the Web Consultant and Designer, cannot go unmentioned for all his online and digital work.

This is an exhilarating update of the goze story and timely. In these times of Covid, the precarious lives of these talented modern goze is even more affecting, as entertainment venues from theatres to music venues have been closed, and freelance artists continue to struggle as events and exhibitions have been cancelled or postponed.

As more events are being shared online, the timing of this digital experience of Flight Paths is impeccable. I hope that as venues begin to reopen, events will also continue to be shared online and within reach of those with access needs, and that Extant will continue to thrive as it promotes theatre for and by the visually impaired.