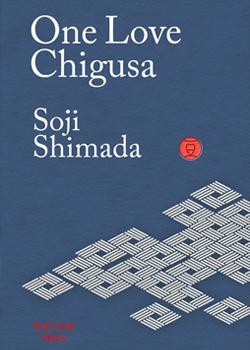 Going to the office was something of a relief. He felt as if he was at last returning to being a normal working person. When he looked around, half the office staff looked as they had before. Someone raised their arm to him in greeting. Grinning, he gave a slight bow in return, but it was a person he didn’t recognise.

It's a scenario that might feel all too familiar for many of us over the coming months, but for Xie Hoyu, it's the very least of his concerns. Returning to the office after a horrific motorcycle accident that requires his mutilated body to be re-built from scratch, the beleaguered protagonist of Shimada Soji’s One Love Chigusa finds his life is never quite the same again.

The year is 2091, and we are in distinctly weird territory, even by Shimada's standards. Famous for bestsellers such as The Tokyo Zodiac Murders (published in English by Pushkin Vertigo) which is invariably hailed as one of the best locked-room mysteries of all time, Shimada pulls no punches in describing the finer points of Xie’s accident and the resulting aftermath. We are told in excruciating detail how his body was ‘crushed, torn to pieces and scattered around’, but that he is to be thankful ‘his insides remained intact despite becoming part of the debris spread around the crash site’. To these remnants, prosthetic arms and legs are attached, and Xie becomes - in essence - a cyborg-like machine-man hybrid.

Longtime aficionados of Japanese pop culture will immediately recognise in the premise echoes of Tetsuo: The Iron Man, Akira, Ghost in the Shell or Astro Boy - the overwhelming sense that this tale is more like something out of a cyberpunk anime or manga than traditional Japanese mystery literature. Indeed, it will come as no surprise, and as the book’s dedication makes plain upfront, that all this is intended very much as a homage to the so called ‘God of Manga’ Osamu Tezuka.

It’s not all about the graphical extremities though - there’s wry humour to be had here too, with some telling nods to the perils of modern, technology-dependent urban living. At one point, Xie’s doctor observes 'You've got an extraordinary number of devices in your body... You'll need to attend rehab classes at least once a week for the next year’. As Xie comes to terms with his new mechanical body, he feels terrible discomfort, fear and loneliness at seeing how almost everyone around him rushes past, faces screwed up in anger. 'In an instant, he lost the confidence to live in this city'. In a manner recalling many of the patients in Oliver Sacks iconic The Man Who Mistook His Wife for a Hat, although Xie’s physical body has been patched up and repaired, his mental acuity has been left bizarrely altered. All women now appear to him as red-faced devils, whilst men become transparent when he looks at them, with 'indicators like calculators displaying financial figures on their bodies'. The world has become a revolting, terrifying place for him. Smiling faces no longer register on his visual cortex and his sexual desire has entirely departed... That is, until he spots a singularly beautiful woman who reignites his reason for living.

With shades of Haruki Murakami’s On Seeing the 100% Perfect Girl One Beautiful April Morning mixed with Makoto Shinkai’s Your Name, we see Xie fall head over heels in love with this one-in-a-million encounter, and he proceeds to follow her with dogged insistence. In a brilliant sequence, which to reveal more of would spoil the punchline, we think we discover the woman's identity, only to be immediately challenged in our assumptions. Much like The Matrix, we are never quite sure what is part of Xie's imagination and what is genuine reality in this strange, futuristic world. At times, the outright weirdness and tones of body-horror recall Kobo Abe’s The Face of Another, whilst at others the techno-philosophising are more reminiscent of Philip K Dick or George Orwell. Reading Shimada's dark, razor sharp prose, I began to ponder that other master of the short story form such as Roald Dahl and his 1953 collection Someone Like You (the source of much of the material that would be adapted into the classic television series Tales of the Unexpected), which has seen a remarkable sales boom in Japan this summer after it was mentioned on TV by the popular comedian Kazlaser. Like Dahl's own 'unexpected' tales, Shimada's fable-like storytelling uses exaggerated, often shocking weirdness to unveil the shadowy, conflicted depths of the human heart; the hidden rhythms and desires that drive us to often incomprehensible action.

All these cultural touch-stones, intended or not, come as shivers up the spine; Easter egg-like nuggets of deja-vu that thrill in the exercise of accumulation, reference stacked within reference. Indeed, if these plot devices feel at times overly familiar or derivative, one could argue that is precisely the point and pleasure of the book's parable-like qualities. As the story progresses further, things slide into the meta-physical as Xie's thoughts become increasingly existential; pondering the very meaning of what it means to live and love. The tale’s closing chapters, full with idolisation of the 'heart', in many ways surface themes similar to those seen in Metropolis - both in its Fritz Lang incarnation, and the Tezuka manga of the same name.

Perhaps what is most remarkable about One Love Chigusa is how unassuming it is in many ways. Fans of Japanese literature in the Anglophone world have been father spoilt for choice recently, with a raft of stellar releases hitting the shelves over the past few years (including the Jay Rubin-edited Penguin Book of Japanese Short Stories, which One Love Chigusa feels as if it shares much of its DNA with). That this little book can fit in so many big ideas is also testament to the highly proficient, powerful translation by David Warren, who will be familiar to many as the British Ambassador to Japan from 2008 to 2012 and Chairman of the Japan Society of the UK from 2013 to 2019. As part of a series of ‘Red Circle Minis’ - offering first editions of some of the finest voices in Japanese literature, written specifically for the series and published in English first - this is an admirable initiative. Likewise, at a concise 115 pages, this is a tale that can be polished off in a single sitting, and when its conclusion finally comes it is every bit as satisfying as it is (quite literally) heartbreaking.

Just as Xie himself is pieced back together following his accident, so too is One Love Chigusa an assemblage of pieces. A kind of MTV-esque ‘greatest hits’ melange of science-fiction tropes rendered into a bullet-like, postmodernist package; taken as a whole it makes a riveting statement as a Frankenstein for our After-Corona age. Electrifying stuff.