The Power of Chowa 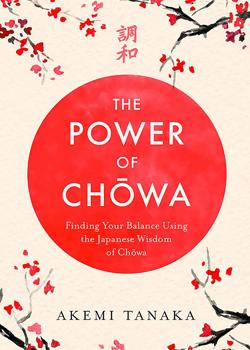 At first glance, the title and cover of the book set off an alarm of suspicion. ‘Another pseudo-Japanese book designed to be sold to orientalism-admiring readers who believe in the mythical world of beautiful and virtuous Japanese culture!’ As a Japanese expat who has spent most of my adult life in the UK, I could instantly feel a strong sense of cynicism gripping me – and this was before I had even read the blurb. If you have a strong connection with Japan – either as a Japanese national or someone who is dedicated to studying the language and culture – your reaction will most likely be one of the following; either picking up the book for its nostalgic familiarity or dismissing it completely, utterly tired of the glorification of Japanese culture.

To be honest, I was the latter. Ever since KonMari (Marie Kondo) brought her “kawaii” style of tidying up to the West through her Netflix show, many people who were persuaded by her pseudo-Japanese “philosophies” have started searching for other tips from the land where women seemingly enjoy both eternal youth and purity. This frustration doesn’t merely arise from the fact that I myself have failed to retain the ever-illusory eternal youth, but more from a tiredness towards someone telling people what to do. Given this, in normal circumstances, I would have never picked up this kind of book. However, under these unusual circumstances, I found myself in a situation where I had to read The power of Chowa. So, I supressed my biases and started reading…

The book is structured into three parts; ‘Part One: Finding your own Balance’, ‘Part Two: Living in Harmony with Others’ and ‘Part Three: Balancing What’s Most Important’. Each section is full of references, with each chapter starting with a quote from great historical figures – the introduction opening with an excerpt from Nitobe Inazo, a famous pre-second World War educator/diplomat for example. This prepares the readers for what is to come in the same way one might have a cup of tea to relax the mind before study. It helps the reader gradually take in the content, allowing them to easily absorb the “life lessons” being taught. As a self-help book, it exhibits perfect format with the content being both easily digestible and almost instantaneous to refer to.

I was not only impressed by the user friendliness of the book, but of course its content. The ideas laid out in the text were drawn from Japanese culture and the author, Tanaka Akemi’s, experiences. There are a lot of books about Japanese culture for people who want to know about the characteristics of Japan and its people. And it seems, increasingly so after KonMari, that there are more and more self-help books based on Japanese culture plaguing the Waterstones recommended section than ever before, with the majority of them being written by non-Japanese authors and reading like guides to the exotic wisdom they uncovered in the East. And the few that are written by Japanese authors still tell stories framed by holding Japan as a cultural curiosity in a distant realm, rather than an embodied reality. Yet, The Power of Chowa is aware of its own place in the market, and both justifies and undermines this easily saleable formula, pairing the seemingly conventional wisdom of Japan with urgent and necessary observations of the nature of contemporary Japanese society.

Part one starts by introducing the Japanese home, discussing the structural details of the traditional Japanese house before analysing how our living spaces affects the way we live our lives. Though conceding that no formula reflects all cases of Japanese living, the writers personal experience legitimises and empowers the ideas being presented, even though the type of housing discussed is becoming increasingly rare for most of the population. Due to the strains of modern life, many people have left for the city, leaving the rural areas where these houses are most common behind. The definition of house presented therefore may not apply to urban Japanese people, however, ‘the Tanaka family home’ evokes a kind of distant memory of Japanese culture, imposing a sense of a mystical past onto a non-Japanese reader.

What impressed me most is the way the book dealt with its cultural representation – avoiding being government propaganda that only really represents the culture of Tokyo. Both refreshingly honest and personal, it presents content in such a way that it doesn’t indoctrinate the reader into a cultish appraisal of Japanese living. Still the book mainly proceeds through scenes of her childhood, referring to the use of chowa by giving an example of the current disaster in the Tohoku region of Japan. Suddenly the past is connected to the present and the reader realises that this is not an idea of the past, and instead a strongly useful concept that is connected to the present situation. Each chapter ends with a set of bullet points and asks questions to engage the reader, helping them create an image of self-development through many years of their life.

Part two then steps into the complex and more abstract nature of human relationships and the role of the self, moving from context of a family to one’s place in society. Japan is analysed as a collective society with a different idea of the individual from the UK and other Western countries. For instance, many people participate in a form of morning exercise called rajio taiso, which has been broadcasted by the Japanese public radio station NHK since 1928. It is serves as both a communal activity as well as a form of morning assembly for companies. The idea of the morning warm-up can be applied to anybody’s schedule, with much research showing how beneficial it can be to one’s way of life. It suggests not only the idea of the individual’s need, but the needs of a community.

The chapter also presents the Japanese work ethic and explains how and why Japanese people, as a workforce and a communal group, behave differently to other nations. While it is almost convinced that the Japanese method is the solution for the breaking down of communities in a disconnected society, it confesses the complications which arise from the complexities of social conscience. For example, in chapter 7, the ‘#WeToo’ movement in Japan is discussed. My growing feeling of pride in my Japanese heritage was suddenly broken by the ugly part of my country: sexual violence and sex-based discrimination. It reminded me of the difficulty in balancing both the Japanese communal sprit and the needs of the individual. Even in a country where the chowa philosophy was born, people have lost sight of the initial principles of chowa, instead succumbing to the most authoritarian and dangerous elements of group culture, where the dominant and most powerful people abuse the hierarchy to get their own way. We are communal creatures even when living in an individualistic society, with peer pressure always placing a strain on our lives. And even in the younger generations, a new form of peer pressure, more authoritarian and toxic than ever before has emerged in the form of social media. In desperation, people tend to jump to a new solution, but it shows you both sides of the coin; reminding you that ‘the grass is always greener on the other side’. It enforces one of the key principles of chowa – finding your own balance.

Part three expands into a wider spectacle, using the tools from earlier to analyse the concepts which govern our ways of being. We must look into fundamental necessities: food, nature, love and humanity. Without a healthy world, we cannot achieve a basic quality of life. For instance, in Japanese cuisine – washoku – there are five flavours:bitter, sour, salty, sweet and savoury; features which are further emphasised by the colours of the food: white, black, red, green and yellow. In this sense washoku is not for survival, but also a complex system of appreciation for the planet with food not only being of instrumental value, but also being valuable in and of itself. How to tackle the climate crisis is the biggest issue globally and people tend only think about how to reduce CO2 emission effectively and quickly. In attempts to curb CO2 production, the Japanese government funded programs of nuclear power in the 1980s onward. However, in trying to save the environment, they forgot to consider their own personal geography, taking nature and its connection to us as being secondary to the needs of an abstract “earth”. This tension lead to the aftermath of the 2011 earthquake and tsunami creating many issues resulting from the Fukushima powerplants. This shows how fragile our approach to nature and ourselves is in modern society, and that forgetting chowa – the idea of living in harmony with our planet as a holistic real – can lead to the disastrous effects of our attempts to deal with climate change. It advocates that we not only attempt to save the planet from ourselves, but also bring nature with us, it not merely being a passive agent that we impose ourselves on but an active participant in the shaping of itself.

Through a guise of pseudo-Japanese thinking, this book has managed to share something functional yet provocative, centring the importance of the concept of chowa as a key notion to find balance and harmony in our lives, relationships, and society.