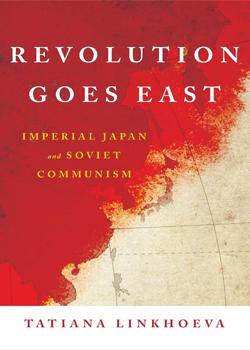 Tatiana Linkhoeva’s Revolution Goes East is a remarkable study that aims to deepen our understanding of both Japanese modern history and the global history of the Russian Revolution.

The main argument of the book is that, in the period between 1917 and the late 1920s, Japanese responses to the Russian Revolution were influenced by a combination of both ideological and geopolitical factors. More crucially, Linkhoeva refocuses the attention upon the Soviet impact on the Japanese empire, its continental aspirations and anxieties. This is not as straightforward as it may appear. The author in fact goes to great lengths to correct the assumptions and misconceptions that have crowded the field until now.

The long historiography of Russo-Japanese relations has been quite predominantly limited to diplomatic relations and military conflicts (chiefly the Russo-Japanese War of 1905, the Siberian Intervention, and the events of WWII).[1] It has often portrayed the two as natural ideological enemies at the expenses of their rich history of interactions and exchanges.

In recent times, global intellectual and transnational studies of Russo-Japanese relations have tried to shift the focus upon more complex and variegated arguments that take into account multiple socio-cultural perspectives as well as the usual ones.[2] This diversification is a timely one. For while state-to-state relations are of course relevant, they often tend to explain merely the perspectives of political elites. Linkhoeva’s analysis not only shows both the intellectual and the geopolitical perspectives, but it also demonstrates how crucial was the interplay of these factors in shaping Japanese responses.

Revolution Goes East is divided in two main sections. The first four chapters deal with the more familiar topic of Russo-Japanese political relations from the Tsarist era to the end of the 1920s. It looks at the different interest groups that supported or openly refuted political rapprochement with Soviet Russia. These positions were hardly static, and they tended to vary over time.

The author discusses the diverse responses to the pressing questions of the nature of the Soviet geopolitical aspirations from Japanese politicians and political groups. Quite interestingly, she shows how in Japan emerged two main approaches that effectively mirrored the somewhat idiosyncratic foreign policy of the Bolsheviks whose goal was the survival of the Soviet Regime through international diplomacy, while facilitating world proletarian revolutions through the support of revolutionary groups in the same countries.

The first approached developed in Japan saw Soviet Russia as a traditional state that would pursue with cynical realism the (tsarist) imperialist policies of spheres of influence in East Asia. A party like any other to coexist with through skilled diplomacy. The core supporters of this approach were party politicians, military and business leaders, as well as some non-governmental groups. The second approach instead recognised Soviet communism as an existential and ideological treat to the Japanese polity. Looking at the revolutionary activities of the Comintern around the world, they concluded that Communism was a foreign “disease” that would only threaten Japan. Among the main figures behind this approach there were officials of the Foreign Ministry, conservative bureaucrats from the Home and Justice Ministries, liberal commentators, the army as well national socialists.

The second section of the book builds upon Linkhoeva’s PhD thesis and it describes the history of leftist movements in Japan and their internal discussions over the nature and meaning of the Revolution. Three main perspectives are presented: the anarchists, the national socialists and the early members of Communist Party of Japan.

Linkhoeva presents a series of arguments that aim to further complicate the historical consensus around the failure of the Left vis-a-vis the totalitarian imperial state in the interwar period. The book points out, in fact, that ‘the battle, in fact, was lost first within the Left’ (p.9). In other words, despite the consensus of the Russian Revolution as a political model, the internal intellectual debates about Soviet Russia and its Revolution were put into frameworks that never questioned the commitment to the nation, the empire and the national polity. On the one hand, the primary goal for leftists became the advancement of mass politics and the betterment of the economic, social and moral conditions of the nation. On the other, the conceptualisation of Russo-Japanese civilisational, racial, and cultural differences in Japanese circles engendered a scepticism over communist universalism and the authority of Russian communists. This diffidence had two key effects. Firstly, it elevated national and imperial interests over supranational concerns of proletarian revolutions. Secondly, Japanese leftists’ anti-Soviet communism often overshadowed their challenges to Japan’s imperialism (p.11).

The substantial bibliography encompasses primary and secondary sources from multiple locations and written in multiple languages. Linkhoeva uses published works, personal documents, as well as extensive research in diplomatic archives in both Russia and Japan.

The final result is an extremely detailed and well researched book that helps us see through the complex variety of Japanese responses to the Russian Revolution. For, as Linkhoeva reminds us, ‘there was no agreement, either among factions of the government, bureaucracy, and the military, or among members of socialist and rightist movement, about what to make of communism and Soviet Russia’ (p.11).

The almost picturesque histories of diplomats, intellectuals and underworld political agents in interwar Japan are all woven together by Linkhoeva’s clear and punctual prose in such a way that makes the reader actually curious to know more and dig deeper. Beyond the remarkable historiographical contribution, perhaps the key quality that makes Revolution Goes East such a critical book is the fact that despite all the questions it answers, it is able to raise many new ones.

[1] For Anglophone historiography see the many works of Ian Nish on the topic.