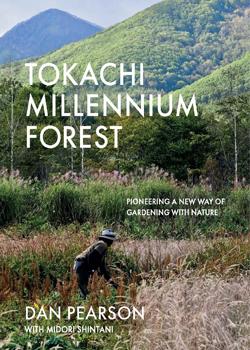 By Dan Pearson with Midori Shintani

Dan Pearson is one of the few garden designers to have broken out of the horticulture world to find, if not A-list fame, then at least wider recognition with the general public. He is known for his wild, naturalistic garden style which can be seen at Lowther Castle in the Lake District, the Trout Stream Garden at Chatsworth and the Garden Museum in London amongst others. This book charts the design, creation and evolution of the Tokachi Millennium Forest, which he has been involved with for the last 20 years.

Situated at the foot of the Hidaka Mountains in southern Hokkaido, the Tokachi Millennium Forest was the brainchild of newspaper magnate Hayashi Mitsushige. Hayashi purchased almost 1000 acres of land between 1990 and 2000 in order to off-set the carbon footprint of his company and protect the land from development. His secondary goal was to counter the urbanisation of the population by providing a place where people can rekindle an intimate relationship with nature. Opening to the public in 2008, the Tokachi Millennium Forest includes vast land forms, forest gardens and huge swathes of naturalistic planting. The goal of reuniting people with nature is also supported by the productive gardens which supply the café, serving seasonal, organic food. Although ostensibly a coffee table book, Pearson’s detailed prose is as informative, insightful, and inspiring as the photography. He takes us on a journey from his first contact with Japanese gardens, through his design process, onto the creation of the garden and up to the maintenance challenges of growing in such a harsh climate.

Pearson takes care to explain his design approach to the garden in the context of the highly industrialised agricultural lowlands of Hokkaido. He explores the history and geography of the area, detailing the Ainu people’s traditional relationship with the landscape as well as Honshu’s culture of satoyama (the area between mountain foothills and arable flat land, from sato (里) village, and yama (山) mountain). There are some thought-provoking words here, as Pearson scathingly describes how modern Japan’s relationship with the land is framed by chemicals, mechanisation and efficiency. He also reflects on the tradition of Japanese gardening and how it holds nature somewhat apart from humans, even whilst idealising it. We are often expected to view rather than touch; the interpretation of nature is controlled and balanced, never wild or unkempt. This, therefore, is an unusual garden for Japan: Pearson’s design is on an extremely large scale and visitors are expected to explore the garden with every sense.

He examines the balance that is struck between visibly cultivated spaces such as the meadow garden and productive gardens, and the native woodland gardens. The latter is carefully tended by the garden team with such a skilled touch that the casual visitor may not realise that they are walking through a gardened space. Pearson takes time to discuss how we think about and interact with wild versus human spaces. He has included the familiar traditional forms of horticulture (vegetable and flower production) with purpose, as an entry point to naturalistic gardening. Although the New Perennial Movement has made naturalistic planting so popular as to become ubiquitous in the West, it is still new in Japan. It is, therefore, interesting to read that Pearson uses the more familiar cultural counterpoints of forest and satoyama to lead the visitor gently out to the meadow garden and then onwards to the earth garden and out to the true wilderness of the mountains. At no point is the Hokkaido Millennium Forest presented as a “Japanese Garden”, but Pearson clearly intends to use his position as an outsider to repackage and reintroduce the Hokkaido landscape and culture to Japanese people. If that is a lofty or arrogant aim, it is one required of him by the goals of Hayashi Mitsushige. If he has succeeded or not, I cannot tell without visiting the garden.

Although Pearson’s writing is fascinating, the shining light of this book are the interludes written by Head Gardener Shintani Midori. Her short essays share thoughts on topics such as the significance of shun 旬 (seasonal eating) and foraging wild food, historical relationships with the forest, her experience of gardening around the world and how the garden connects people. A mixture of personal stories and cultural reflection make for a wonderful insight into a Japanese understanding of nature that can sometimes seem lost amongst the bright lights of Tokyo or Osaka.

For the knowledgeable gardener, there is much detail here on the construction and maintenance of the garden. The planting is carefully designed to mimic wild ecosystems using native and non-native plants which are rarely seen in Japan and Pearson goes into detail about the botanical interactions in each area of the garden. The exquisite photographs illustrate the planting as well as the wider landscape and are thoroughly labelled with botanical names and design details.

It is unusual and refreshing for a garden designer’s book to include the voice of the gardeners or so much detail about maintenance. This garden is in an extremely challenging climate with long, cold winters and short, hot summers and so it is fascinating to hear about the techniques that the gardeners employ to work with the seasons. The most surprising is ‘breaking the winter’ by scattering charcoal on the surface of the snow to speed melting. Although they are maintaining a Western-style garden, the gardeners employ Japanese techniques and aesthetics. Pearson describes the approach of 透かし sukashi (transparency) in the thinning of perennial plants so that they can recover from the heavy summer rains. The gardeners also build 冬囲い fuyugakoi (protective covers for plants) from rice straw mats to protect woody shrubs from the temperatures that drop down to -25°C. Both Pearson and Shintani’s writing suggest that the Japanese maintenance approach brings a subtlety and perspective that is often missing from naturalistic gardens in Europe. The attention to both the micro and macro is essential for a garden whose core aim is to be sustainable for 1,000 years. In this search for sustainability, Pearson is honest about the experiments with plants that have failed to thrive and about compromises that have to be made due to time, climate and money. He helpfully lists the planting mixes for the meadow garden, including the failures and what has been substituted for them. It would certainly be interesting to see how these lists evolve over the coming decades as the climate warms. Pearson also questions whether or not it is truly appropriate to be sinking energy and resources into growing species that cannot survive without intervention, such as the collection of roses he included in the productive gardens. The reluctant conclusion he comes to is that the intensive inputs are worth the resulting engagement with visitors; a compromise that many environmental gardeners struggle with.

Pearson’s writing style sometimes becomes too dense or florid, and non-gardeners are likely to find the use of botanical names and technical terms difficult to grapple with. However, the photographs serve very well to illustrate what may be opaque in the text and this book will appeal to anyone with an interest in the natural world. If nothing else, it will certainly inspire you to plan a trip to Hokkaido to see the garden for yourself.