Flower Petals Fall, but the Flower Endures: The Japanese Philosophy of Transience 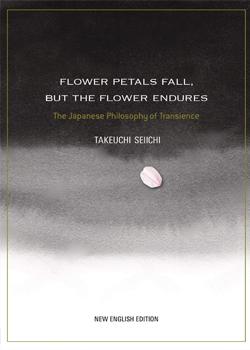 The first thing that occurred when considering how to review this book is that we judge books by their covers. We cannot help it. My specialism is brand semiotics which studies the implicit associations and connotations emedded in all sorts of merchandising and media. One of the principles I teach is that we need to defy the old adage ‘never judge a book by its cover’ and: judge the book by the cover! All packaging seeks to rhetorically persuade the beholder that its contents are worth sampling, whether food or words. The cover in this case is a beautifully subtle ink washed book cover, its gradated segue from black to grey to white redolent of some beautiful sumi-e painting. Having received the book from the Japan Society I was expecting a treatise on the transience in Japanese aesthetics, art, poetry, music and the performing arts. As a practitioner of Japanese calligraphy for 20 years, keen appreciator of Japanese beauty and Buddhist meditator, I was a bit disappointed not to hear more about the idea transience in Japanese art: the mended gilding embedded in kitsugi porcelain, the symbolism of nimbus clouds motifs in kimono for instance or seasonal metaphors indicating transience in classic waka, tanka, and haiku poetry. Given the cover I was expecting something in the line of the classic In Praise of Shadows by Tanizaki Junichiro. This was not that. Yes, the subtitle is the Japanese philosophy of transience, and this was the core of the book, but I felt the meat of the content only spoke to one aspect of impermanence, the vicissitudes of life that buffet our ability to be self-determining. However, it was a still and informative and edifying, just that the semiotics of the book cover wrong footed me.

In the preface Takeuichi writes: ‘When the voluntary (mizukara) actions of human beings are displaced by grand spontaneous (onozukara) functions, the values, meanings, “playfulness” and subliminity (shogon) of mizukara appear at the boundaries (awai) between them These concepts form the underpinnings of Japanese mujo philosophy. which I hope will become clearer in the text that follows’ (p. x).

The through-line or red thread running through the book, if there can be said to be one, is that of the dialectic between onozukara and mizukara. There is a familiar feel to this concept pair for me. Every gaikokujin picking up a Tuttle or Kodansha book on Japanese culture will be familiar with contrasts like honne vs tatemae, giri and ninjo and other such binaries. The best way I found of assimilating this onozukara / mizukara dialectic was their similarity to the Machiavellian concept of virtu and fortuna, the yin and yang of political outcomes respectively domineering action and the vagaries of chance. This idea is long debated by historians: for instance, the ‘Great Men’ school of history versus the Annales school of ‘longue durée’ of gradual socio-economic shifts in terms of what factors are ascribed prominence in accounting for unfolding events. Except that the onozukara and mizukara both seem conducive to an attitude of resignation rather than political action ,as in Machiavelli. The text proceeds mainly through literary and other examples. The author acquaints us with the two concepts through related concepts. We learn for instance that hakanai is a thread in contemporary nihilism (the inability to predict the future, what we might call imponderability). Seiichi delves into excerpts of classic writers like novelist Natsume Soseki and poet/activist Miyazawa Kenji to glean examples from their work.

An example of onozukara’s influence and being inextricably linked to mizukara is the examples of “it turns out that we will get married”. This suggests that the pairing of bride and groom relied upon an improbable concatenation of events including their facticity, background; way beyond their conscious control. The use of the passive voice reflecting the ambiguous, diffuse and often deliberately imprecise nature of the Japanese language - brought out by Oe Kenzaburo in his Nobel Prize winning acceptance speech, Japan, the Ambiguous and Myself – underscores the sense of fatalism in the concept. I was once told about the notion of en or thread of karma that connects to people by an ex-girlfriend. This sort of fatalism in a nihilistic vein, more than aesthetic aspects of mujokan is what the book focuses on. For me, this gave it a dour and gloomy aspect, that I found salutary, but not what I was expecting.

I did learn a lot about the etymology of fundamental Japanese concepts such as yasashii or gentleness and the link between that ideogram and the kanji for actor (that I infer is the performative simpering actors are known for). I learned about totoi for the idea of preciousness,  and the related idea of ichigu. Takeuchi quotes Shiga Naoya’s essay A Drop in the Nile ‘Even if you go back scores of thousands of years, you cannot find another me…. I will not be born again’ (p. 50) to illustrate this. I learned about the word for thank you arigatou as deriving from arigatai as being grateful for life. I learned about itamu the verb to hurt, or to be pained as being literally ‘something slipping out of the heart’ and the that the word sayonara means ‘as things will be’ a way of acquiescing in the fate of the departee. I learned about the divine and incantatory origins of the iwai as a form of celebration and shiawase as meaning something fitted or aligned with circumstances. I learned that the word sumimasen comes from the idea of not allowing a bad situation to persist (the negation of sumu  of residing or settling), and that omoshiroi originates in the Shinto creation myth involving the reclusive sun goddess, who was tempted out of the cave with a lascivious dance (Amaterasu who is now thought to be residing in a mirror at the Ise Shrine). The word omoshiroi literally means surface white, or bright face to denote the faces of those returned to sunshine. I love the way Japanese can be so deceptively and brutally direct. It reminded me of my favourite portmanteau, kokoronokori – meaning nostalgia for something: literally ‘one’s heart’s left behind’. The book was indeed replete with such fascinating linguistic excursions which was great, but it also felt a little bit disorientating at points too.

The frequent jump from one concept to another made me think that this book would have been more appropriately formatted perhaps as a dictionary or as a compendium of concepts for easy reference to the reader.

Overall, I was a bit perplexed because, to my mind, the book deals with only one aspect of transience: the unpredictability of life which requires a certain fatalism. What was missing for me was the phenomenological and experiential dimension of impermanence and clinging to things that change as a source of suffering – and there was so much potential to explore this. My Buddhist meditation practice is a daily lesson in this regard but I also spoke with my calligraphy teacher Akemi Lucas, Koshu. She shared with me her thoughts on Mujokan, which I would like to share here with her permission.

The front page of her 2021 calendar she has a beautiful sumi-e painting and the following inscription:

Wisteria blooms, the delicate petals sway in the breeze, their fleeting beauty all too soon scattered underfoot, reminding us of the transience and impermanence of life. In our hearts, we know that the sun will warm the earth, Spring will shake off the chill of Winter and the Wisteria will once again be clothed in fragrant beauty. As you gaze at the blossom remember this lesson: be present, learn to live in this moment.

This shows the relish that can be taken in mono no aware. It reminded me of the need for a kigo in haiku and acute awareness of the passing of the seasons for Japanese people. I was surprised not to see more poetry in the book, seasonality, and explicit Buddhist concepts. There was mention of the Heart Sutra for instance, ‘form is emptiness, emptiness is form’ – but overall Buddhism was given a relatively cursory mention even though it is arguably the most thorough philosophy of transience – with our attachments leading to suffering and probably best expressed in Kukai’s Letter to a Nobleman

That billions have lived in China, in Japan,
None have been immortal, from time immemorial:
Ancient sage kings or tyrants, good subjects or bad,
Fair ladies and homely – who could enjoy eternal youth?
Noble men and lowly alike, without exception, die away;
They all have died, reduced to dust and ashes;
The singing halls and dancing stages have become the abodes of foxes.
Transient as dreams, bubbles or lightening, all are perpetual travelers.

I was surprised no to see any reference for example to the iroha uta poem, a chain of hiragana with which I am fascinated – which is a pangram, containing all Japanese phonetics - a formative text in the Japanese education system and suffused with impermanence. No reference to the classics of Japanese the Tale of Heike and Tale of Genji, the former characterised by the short life span, sudden reversal of fortunes, the worldly winds of political machinations courtiers taking the tonsure, or out of favour noblemen being sent into exile; the latter characterised by the drifting and enigmatic shining prince, Genji, moving from one unsatisfactory liaison to the next with various amenable various court women, unaware of his craving to replace the mother love he’d never had. Given the title of the poem, again, I was expecting the author to touch on that most famous of seasonal tropes, the falling cherry blossom.

On the subject of cherry blossoms, anthropologist Ohnuki-Tierney’s book Kamikaze, Cherry Blossoms and Nationalisms (2002) is a masterclass in thinking about the paradoxes of ephemerality in Japan. It was impossible for me not to read it alongside Flower Petals Fall, so obvious are the parallels. Ohnuki-Tierney traces the percolation of the cherry blossom into Japanese painting, Yamato-e in the 9th century as a way of forging a nativist Japanese style vs the previously influential Chinese styles. She then chronicles the cherry blossom as a polysemous sign standing for the individual and social groups in Japan, how it became immortalised in art and how it later became appropriated by a death cult of militarism in the 1930s: ‘The symbolism of cherry blossoms was transformed from full blooms as a life force to falling petals as the sacrifice of soldiers, who then are reborn as blossoms…’ (p. 121) . But even after death the souls (damashii) of these soldiers endured even after the petals had been scattered. The aesthetic dimension of impermanence is a hugely important part of the story. This dimension was almost totally ignored in the book, to the detriment, I believe, of the author’s thesis. Overall, I thought this book was a very informative read but I had the nagging feeling I had been mis sold because its content was more about fatalism and resignation to circumstances than transience – particularly its aesthetic, experiential dimensions - of which the author could have said so much more.