British Engagement with Japan, 1854–1922: The Origins and Course of an Unlikely Alliance 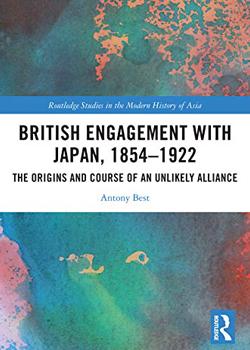 This is an extremely well-researched book which charts the relationship of Britain and Japan from its earliest days until the demise of the Anglo-Japanese alliance in the early 1920s. Best tells us in the introduction that the book ‘is concerned with solving the puzzle of both how the alliance came into existence and how it endured for twenty years’ (p. 2) and that is very much what it does.

Inevitably, scholars who have themselves trawled in the same waters will find things to object to. Let’s get the biggest issue out of the way first: the lack of Japanese opinions in the book – the relationship is almost exclusively viewed from the British side. From A to G in the index, there are just two Japanese names (Princes Arisugawa Takehito and Fushimi Sadanaru) listed, but around eighty British ones.

I felt that there were moments when matters could have been looked at from a longer perspective. Best makes much of the ‘civilizational tests’ that Japan had to pass before the 1858 treaty between the two countries could be revised (it took until 1894). But I think that this is how we still evaluate developing countries, although instead of using the word ‘civilisation’, we say things like ‘transparency’, ‘democracy’, ‘human rights’ and ‘rule of law’. In this context, Best mentions Queen Victoria’s balancing praise of Japan’s progress with pressing for religious toleration when she met Iwakura Tomomi in 1872 (p. 36). To me it seems reasonable for the British to see the persecution of Christians in Japan as a violation of civilised values.

Some of the attitudes Best holds up as unfair have elements of truth in them: ‘Asian countries’, he tells us, ‘were deemed to be arbitrary and cruel’ (p. 13). This really was not a completely unreasonable thing to say about Japan and China: the Japanese justice system was very murky (in 1866, an official told Sir Harry Parkes ‘We think by concealing the laws they will inspire more terror’) and there was cruelty in China on an unimaginable scale: 20 to 30 million people died as a result of the Taiping Rebellion.[1]

There are moments when one wants a wider perspective as well. About Queen Victoria’s refusal to receive Prince Higashi-Fushimi Yorihito at Balmoral in 1893, Best says that the ‘episode reiterates Japan’s problem – it was considered to be but one of a number of Asian potentates and thus not deserving of any special treatment’ (p. 40). Actually the prince was getting the same sort of treatment as everybody else. In 1867, the Queen, writing about a visit by the Tsar of Russia – hardly a minor potentate – said that she was ‘UTTERLY incapable (overwhelmed with work, and the responsibility of her arduous position…) of entertaining any Royal personage’.[2] But in the Japanese case, her private secretary told the Foreign Secretary that she might receive the prince at Windsor – unfortunately Best doesn’t say if she did or not.

I also wonder about Best’s view that The Mikado ‘was intended as a satire on the superficial portrayals of Japan prevalent in British society’ (p. 43). There may have been a small element of this, but The Mikado was basically a satire on all of British society. As G.K. Chesterton put it, ‘Gilbert pursued and persecuted the evils of modern England ... I doubt if there is a single joke in the whole play that fits the Japanese.’[3]

I’m doing what all authors hate and that is singling out tiny little bits of a book for criticism while ignoring swathes of excellence. So, let’s move to what I liked. Firstly, that so much of it is genuinely new. The background to the relationship (inevitably) treads upon familiar ground, but once we get to the build-up to the Anglo-Japanese alliance, it is simply superb, supported by voluminous research that has never before seen the light of day. Best largely eschews the traditional sources – there is surprisingly little quoting, for example, of the British Ministers to Japan, who have reliably supplied much of the main meat for most other writers on this topic (myself included). Rather we hear less familiar voices: businessmen, bankers, missionaries and so on. He is not afraid to quote eccentric, yet telling, opinions, such as that of Bishop George Smith, who maintained that the ‘prevalence of fogs and mists’ in Japan had helped impart the ‘solid, stable and energetic qualities’ of the British (rather – presumably – than their love of complaining) (p. 21).

A major positive thing about the book is that it is an exceptionally easy read. I don’t think I’m alone in opening academic books with a slight feeling of dread, but this one is the opposite of hard work, managing to be entertaining and scholarly at the same time, with every page brimming with interest for the general reader as much as the specialist.

Another thing we don’t expect from such books is memorable lines but there are a few. My favourite begins chapter 6: ‘Nothing erodes an alliance quicker than engaging in a successful struggle against a common opponent’ (p. 172). It is a striking idea that had never occurred to me, perfectly expressed. While on the subject of clarity, I think the conclusion is a model of scholarly writing, describing the move towards the Anglo-Japanese alliance in a way that would be perfectly understandable to an undergraduate while satisfying to an expert. If only all academics could express themselves like this!

It is above all a balanced book. Best is right that accounts of British relations with Japan have tended to either focus on the high politics or cultural aspects. He does both. I particularly like the way he separates racial and cultural hostility to Japan. Any criticism of the Japanese can be seen in racial terms, but I think that British reservations about the country were mostly based on the fact that it was seen as being just too ‘out there’ – it would only be treated as an equal when it fell into line with Western ways.

I could go on and on but I will instead end by saying that while of course there are caveats, this is a very good book and I strongly recommend it to anybody interested in Britain’s relationship with Japan. I actually think, for all my earlier quibbles, that it’s so well done that you don’t need to be all that interested in the topic to still find it an enjoyable read.