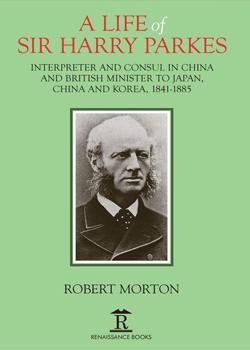 Sir Harry Parkes, British Minister to Japan at the time of the Meiji Restoration in 1868, has had a generally poor press. He is seen as bad-tempered, aggressive, the essence of the belligerent imperialist. Much of the evidence for this comes from more culturally sympathetic observers of Japan like Ernest Satow and William Willis, who disliked working for a man they saw as a hyperactive, overbearing martinet. Lauded by his peers for his devotion to Empire (The Times described his death in 1885 in Peking at the age of 57 as ‘a national calamity’), Parkes’s reputation is inevitably lower in a more sceptical and revisionist age.

But he deserves re-evaluation, and Robert Morton has taken this task on in this very readable biography. To start with, it is a rattling good tale. Parkes had an extraordinary life. The son of a West Midlands ironmaster, he was orphaned at the age of five. His uncle appears to have run through what money there was before he too died, and by the age of thirteen Parkes was on his way to join his sisters in Macau, where their cousin Mary had married a missionary. He worked for Sir Henry Pottinger, the Superintendent of Trade (and later first Governor of Hong Kong); he witnessed the 1842 Treaty of Nanking, which ended the First Opium War; having qualified in the language at the age of fifteen, he joined the Chinese Consular Service, and served as interpreter, clerk and consul in China for the next twenty years. Parkes as a young man – ambitious, driven, obsessively self-improving – is well drawn.

There was hostility to foreigners as the Western powers attempted to open China to trade. Parkes’s attitude towards the Chinese hardened. By 1856 he was acting Consul in Guangzhou. When Chinese officials there boarded the Arrow, a Hong Kong-registered ship, Parkes got into a heated argument with them, demanded public redress, and persuaded the Governor of Hong Kong to escalate matters. The Second Opium War was the result. Criticism of British aggression (and of Parkes’s actions) brought down Lord Palmerston’s Government, although he won the subsequent election.

Parkes remained in the eye of the storm as the war continued. In 1860, he was captured by the Chinese. At one point, hands tied and forced to his knees, he faced imminent execution. Although reprieved, he was held in chains and interrogated under duress. He never bargained for his safety. Eventually he was released. In retaliation for the deaths of other prisoners in captivity, British troops burned down the Emperor’s Summer Palace. In 1862, Parkes returned to Britain a hero and was knighted at the age of 34.

He was undeniably a man of great courage, but also an aggressive servant of Empire. This tension became more difficult in Japan, where he was to spend eighteen years from 1865 to 1883. As in China, there was violence against foreigners and resistance to the ‘unequal treaties’ being forced upon the country. But Japan was a more complex political environment. The weakened Shogunate was caught between different opposition factions – the forces of incipient modernisation on the one hand, the traditionalists gathered around the Emperor, wanting to expel the foreign barbarians, on the other. Parkes seems to have been a man who tended to start difficult conversations with a (metaphorical) punch on the nose: not the perfect temperament for subtle diplomacy.

Robert Morton sifts the evidence from Parkes’s time in Japan carefully. Satow despaired of his aggressiveness with Japanese officials and restless, undirected energy. But Parkes’s forcing the pace with the Shogunate, demanding that the Treaties be honoured and threatening to back all this up with gunboats, did eventually make a difference. And there is evidence that Parkes, helped by Satow and A B Mitford, read the political scene accurately. He was initially inclined to support the Shogun. But unlike other European powers, especially the French, he saw how power had shifted by early 1868, recognised the factions around the Emperor as having the upper hand, and skilfully managed the double act of giving them moral support while ensuring the Powers remained neutral in the developing civil war. He brushed to one side a near-fatal attack in Kyoto as he rode to his first audience with Emperor Meiji: his assailant was disarmed and decapitated by a Japanese official. ‘Sensation diplomacy, this’, he remarked to Mitford, riding next to him.

Parkes dominated his diplomatic colleagues, whom he generally corralled behind the line he wanted to take. Japanese reactions to him were more nuanced. He was seen, in Robert Morton’s words, as the new Japan’s ‘best friend among quite a hostile diplomatic corps’. He supported Japan’s modernisation, and helped to get British engineers and businessmen involved. But Japanese respect for him was tempered. As Iwakura, the leader of the 1870-1872 fact-finding mission to the West, told Satow, Parkes’s ‘violent demeanour often damaged the effect of the sincere and friendly advice he offered to them’. With Parkes, you took the rough with the smooth – or perhaps the forcefulness and acerbity with the more pragmatic judgments that underpinned his management of British policy.

There was another side to him – that of a loving family man. He married Fanny Plumer in 1855. They had seven children, one of whom died at 15. It was a devoted union, although it cannot have been an easy life for her. One reads her story with increasing admiration for her fortitude and spirit – surviving a ship collision in Yokohama harbour that cost over 100 lives, climbing Mt Fuji with her husband out of season – but also a sense of the emotional strain of her life in Japan. Depression set in during the 1870s: there are hints of suicidal thoughts. Parkes appears, from Fanny’s account, to have been a more sensitive and caring husband than his public demeanour might have suggested. Eventually she returned to England with her children: Parkes’s letter describing his anguish at arriving home just too late to be with her during her final illness is heart-rending. It is striking that his surviving daughters appear to have been similarly devoted to him (and that they all, intriguingly, married substantially older men).

As time went on, Parkes’s influence in Japan declined. Treaty revision negotiations went nowhere and the Japanese became progressively resentful of his ‘rough insensitive paternalism’ (in Gordon Daniels’ phrase). He was unsuited to a role that required a more subtle and emollient style. When he was finally posted to China as Minister in 1883, however, the Japanese paid dutiful tribute to his work over many years. The foreign community in China was delighted at the return of a hard man although the Chinese officials reacted badly to his (literal) table-thumping. Nonetheless, his year and a half in Peking did see outstanding claims resolved – as a colleague wrote after his death: ‘[they] were settled in desperation by the authorities… who knew they would have no peace until they had given in.’

When he died, almost certainly of overwork, but weakened by typhoid fever, flags were half-masted across East Asia. Robert Morton quotes contemporary comparisons with Gordon of Khartoum, who had died two months earlier, and whom Parkes had known well in China – his second son was christened Gordon. There are affinities – not least the almost uncontrollable, evangelical fervour with which Parkes pursued the interests of Britain and the Empire throughout his career. When Lytton Strachey dissected and debunked the legacy of Gordon in Eminent Victorians, it was the death-knell of an age. Parkes is a less complex figure. But Robert Morton captures the different facets of his character sensitively: aggression undercut by vulnerability (‘I sometimes wish I were a cleverer man’, he wrote in 1865, bewailing his ‘nervous irritability’), and a compulsion to work hard, so as, he wrote to his daughter Minnie shortly before his death, to be worthy of her love. He must have been a nightmare to work for, although there are a few examples of his being (perhaps encouraged by Fanny, who was loved by all) a more considerate man than the conventional view of him suggests.

This well-illustrated biography (although a map would also have helped) is a suitable tribute to a man revered in his time and profoundly unfashionable today. His bust was unveiled in St Paul’s two years after his death, but the statue of him on the Bund in Shanghai was melted down by the Japanese during World War Two. Robert Morton records his life and achievements, as well as his personality – difficult, but not contemptible – in a balanced and judicious way, and with a biographer’s voice that is an attractive mixture of chatty enthusiasm and rigorous scholarship. It is an excellent companion piece to his 2017 biography of A B Mitford, and a very enjoyable read.