The Day the Sun Fell: Memoirs of a Survivor of the Atomic Bomb 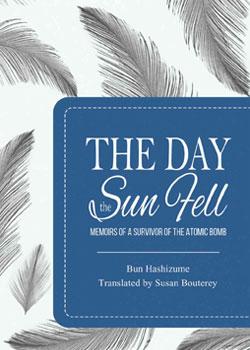 Hashizume Bun might be well-known to some readers since her experiences of the atomic bombing of Hiroshima were made into a short anime film for children, A Hiroshima Girl’s Story of Survival for CBBC Newsround in 2016. Hashizume is a hibakusha, which means ‘person of the bomb’ in Japanese. Around 145,000 atomic bomb survivors are estimated to be still living according to a 2019 study.

Hashizume always wanted to be a poet, as she tells us in A Hiroshima Girl’s Story of Survival, and Hashizume’s memoir The Day the Sun Fell (Shojo juyonsai no genbaku taiken-ki, 2001) is indeed as much about her becoming a writer as it is about her experiences growing up in the aftermath of the atomic bomb. Although this narrative obviously falls into the category of ”genbaku bungaku”, atomic bomb literature, it can also be placed within a proud trajectory of memoirs written by authors from Hiroshima, including Hayashi Fumiko (1903-1951), born in Hiroshima prefecture the author of Diary of a Vagabond.

The Day the Sun Fell is an accessible emotional thriller through which we follow Hashizume and her family and friends as they try to recover from the bomb. The world in which Hashizume grew up was one in which hibakusha had been stripped, not only of spiritual and material sustenance but also of human dignity. Despite its mixed form, The Day the Sun Fell is a rare work of personal recollection based on years of the author’s efforts to tell and retell the story of the atomic bombing both in Japan and, increasingly, around the world. Many assume that, for survivors, there is an almost automatic desire to talk about the experience, however, detailed, reflective memoirs about Hiroshima and Nagasaki are rare. It takes time and effort to reflect on one’s life and the majority of hibakusha who survived simply do not have the health, time, or education to look back.

Jonathan Schell, author of The Gift of Time (1998), wrote that the only sources that give us a glimpse of the ‘human truth’ behind Hiroshima and Nagasaki, are the stories of the survivors. Hashizume’s memoir provides us with an extraordinarily precious insight into this ‘human truth’. Aged 14, Hashizume was working for the Hiroshima Savings Bureau, a department of the Ministry of Communications, 1.5 km from ground zero. Her work was to process ledgers so her main relief was to look forward to practicing Arabic numerals in her breaks. Thus, like the majority of jakunen hibakusha, those who were children at the time of the bomb - whose stories are now coming to light - Hashizume has not been educated beyond reading, writing and arithmetic, “three ‘R’s”. Her childhood was afflicted twice, both by the war and the aftermath of the atomic bomb. During the war, speaking and learning foreign languages and access to foreign culture was banned. It was only years after that Hashizume first heard foreign songs and classical music for the first time. In one strange episode in the book, Hashizume comes across classical musicians playing in the ruins of the former Industrial Promotion hall, now the world-famous atomic bomb dome.

During the war, adolescent girls were mobilized for the war effort and most young men from Hiroshima would have been drafted to fight at sea or in Japan’s colonies. Hashizume’s father was a colonial administrator in Manchuria, who rarely came home on leave. From 10 March 1945, the US conducted intense low-flying bombing raids over Japanese cities. Hiroshima was spared, for the time being and more and more military and civilians were relocated to Hiroshima, swelling the population. By the summer, there was nothing much to eat: even soybeans were rare and white rice was rarely consumed, except by the military. Still, Hashizume describes how children could enjoy swimming and boat races in the local rivers as she and others watched fishermen cast their nets for ayu, sweet fish, in the many rivers that determine the layout of Hiroshima.

However, this relatively tranquil, if restricted, existence for children was annihilated by the atomic bombing. At work at the Savings Bureau when the Hiroshima bomb was dropped at 8.15 am on 6 August 1945, Hashizume’s own escape from to the Red Cross hospital was by wading through the waters of the Motoyasu river, an extension of the river Ota. In this, Hashizume was aided by her colleague Ms Tomoyanaga, who ensured that she did not die that night. Sensing death was near, Hashizume escaped the flames encroaching the hospital and sheltered under a bush in the garden with another teenager, Mr Iida. Hashizume describes the intense feelings of loneliness they felt as they watched the city burn to the ground while discussing their hobbies which were ‘reading and music’. Their futures were being consumed in a radioactive conflagration. Hashizume describes the scene: ‘Truly everyone was like a dumbstruck, solitary lump of tattered rags. No, they’re not humans, it has to be a bad dream, I thought.’ (p. 22) She even felt embarrassed to cry out in human language when the only sounds others had available to them were groans and grunts.

Hashizume lost her seven-year-old brother Hideo as well as a dear uncle to the bomb although luckily most of her immediate family did survive including two of her grandparents, father and mother, another brother and two sisters. But afterwards, her immediate family suffered from radiation sickness, and she lost her younger sister to suicide while her older sister’s looks were ruined. Hashizume spent ten years recovering from the internal effects of radiation in various hospitals, missing out on precious family life. The book reflects much of the detective work she had to do as she tried to reconstruct ‘that day’ as well as revisit and reconnect with friends, relatives and those who saved her.

Thus, the majority of the book is taken up with the life stories of her friends and family members and as such it contains important details which will help future historians of Hiroshima. While they were attempting to survive, Hashizume’s family also tried to help others but many neighbours committed suicide as they struggled and failed to support their families. Although Hashizume did go on to marry and have a healthy family (as instructed to by her father), she finds it hard, as she writes in the Preface, to ‘express in writing the painful struggles I have faced over the years as I endured illnesses and other hardships.’

Learning English in her sixties has helped Hashizume to tell her story around the world. As the New Zealand peace activist Elsie Locke (1912-2001) told her, if she did not speak, ‘important truths will sink into oblivion’. One of her best advocates is the translator Susan Bouterey who has translated Hashizume’s mixed, haibun style, with delicacy. Hashizume has decided to update the book since the original Japanese edition including an appeal for nuclear abolition especially in the light of the 2011 Fukushima nuclear power plant disaster. These sections therefore read as something of an afterthought suffering from a certain repetitive and declarative style. The ‘case study’ style chapter titled ‘My Health Since the Blast’ (p. 209) may have seemed necessary to Hashizume, in order to reaffirm the internal effects of radiation; however, since these diagnoses are in themselves part of her story, the important information contained here could have been more powerfully conveyed if it had been woven into the main narrative.

The memoirs written by survivors of the atomic bomb have already changed the literary landscape of Japan forever. Works by hibakusha writers such as Kurihara Sadako, Hara Tamiki, Hayashi Kyoko, Toge Sankichi and Ota Yoko have been anthologised, translated and passed into the canon (the latter’s City of Corpses was republished in 2018 in The Penguin Book of Japanese Short Stories edited by Jay Rubin). Drawing on the widely accepted and highly sophisticated personal memoir forms in Japanese letters, such memoirs are testament to the high value placed on the authenticity of the personal voice in Japanese literature. But the ‘I’ used is always contextual, anchored in the different audiences and readerships that give life to it.

In this light, then, we can come to see the divergence and coexistence of Hashizume’s autobiographical voices. For instance, in the CBBC anime film for children, the narrator’s voice tells us: ‘I don’t blame those who dropped the bomb… but I can never forgive the fact that human beings dropped the bomb on other human beings’. In The Day the Sun Fell Hashizume expresses considerable anger and frustration with those who do not understand, and she asserts, will never understand the grief she and other survivors she has gone through. The question of forgiveness for those who dropped the bomb, is not something Hashizume, as a hibakusha, thought about much until questioned by foreign audiences. Her nuanced response is that an apology is necessary not merely to hibakusha but to ‘all mankind’ for the use and promotion of nuclear weapons. (p. 193).

Hashizume’s memoir is a considerable and valuable addition, not only to the canon of atomic bomb literature, but also to women’s taiken-ki, experiences of war. The genre of war memoir, especially by ex-soldiers, is well-established: personal recollections were the main source of storytelling in the culture of censorship and denial which arose in the long post-war. But women’s self-authored recollections of war are much rarer and this is a superlative example.