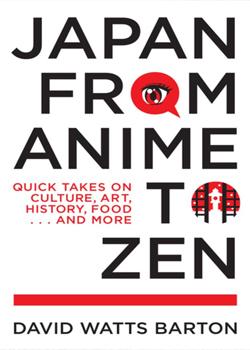 Everyone understands that Japan is an important country. But it is useful to remember why. For despite its modest size, Japan consistently punches above its weight.

All told, this very much contributes to a sense that this book is designed to be seen as something to be dipped into and savoured as small, bite-size morsels. While there certainly are broader narrative strokes to be had here - charting the course of Japan as a nation from historical times through to the present day, for example - its emphasis on 'quick takes' very much positions the book as the (hopefully) satisfactory answer to those elusive questions on the tip of your tongue.

To those looking to take their first trip to Japan, or maybe left pondering many of the nuances of the nation’s culture on their return, the sheer expansiveness in scope of the book makes it an ideal travel companion. Conversely, to longtime Japan watchers, much of the contents will no doubt already be familiar, and some chapters will naturally offer more value than others. An early section on condiments such as shoyu (soy sauce) and nori (seaweed), for example, is largely just a recap of details you could find in any Japanese cookbook or after a cursory look online. For those readers with a strong foundation already in much of the everyday paraphernalia of Japan, the real value is to be found elsewhere, and Barton’s journalistic eye for detail serves up some fascinating (and genuinely revelatory) sections on topics such as Japan’s equivalent to the farm-to-fork movement, as well as a run down of the essential ingredients that make up a Japanese wedding (eg. guests usually pay a fee in the form of ‘gift money’ to the newlyweds in order to attend - sometimes as much as ¥30,000, about £300).

Other standout sections include a timely look at womanhood in Japan, which unpacks the context of the yamato nadeshiko (the personification of the ideal woman), explaining how the symbolism of the nadeshiko - literally a carnation flower - can also be taken in the context of the kanji’s reading as ‘caressable child’. As the book goes on to explain, being a woman in Japan often ‘still boils down to being pretty, well mannered, good at taking care of others, being not-too-smart (though a little sassy is cute), and above all, generally pleasing to men’.

Elsewhere, there is a fascinating look at how art transformed the small island of Naoshima - only eight square kilometres in size, and located between mainland Honshu and southern Shikoku - via transformative input from big name Japanese talent such as architect Tadao Ando as well as Yaoi Kusama, whose famed giant polka-dot pumpkins have very much become the island’s mascots. Follow-up sections on Japanese architecture as a whole and the history of the ultra-compact capsule hotel concept are also refreshing additions and do much to correct the balance regarding Japan’s built environment as an often overlooked element of both its artistic heritage and contemporary history.

The tone throughout is a clean, breezy style that while - given the format of the book - naturally never shies away from handling often complex and potentially weighty topics, always manages to do so in a way that presents them at their leanest and most accessible. Often, compendiums of this nature feel like they present Japan as a kind of codebook, something to be deciphered and unlocked with almost mathematical difficulty. Here, the brevity of each entry ensures an almost business-like focus on key takeaways and the essential facts - you could almost imagine some of these entries as bullet-pointed Powerpoint slides, as opposed to entries in a book.

This constant eye toward demystification and dispelling of archetypes is worth singling out for particular praise. One might say that more than 150 years since Japan first opened its doors to the world, and in an age where the internet can satisfy even the most insatiably curious of questioners, surely there must be nothing left to 'demystify' about the nation? And yet, as chapters on geisha and ninja allude to - misconceptions and generalisations about Japan exist even to this day. Offering a well-informed tonic to these often illusory images, while simultaneously avoiding a wholesale stripping away of the attractive mystique they lend to Japan is a hard thing to do, but there is a role for it all the same, and this book is to be applauded for at the very least attempting to tackle these tricky areas.

Does a book like this contribute to and further orientalist visions of Japan into the 21st century? I think the answer to that question is more complex than it might initially seem. In the hands of a less skillful author, I think we could see this as just another in an endless torrent of 'images' of Japan that cascade into our consciousness, harking back to the famous Oscar Wilde line: ‘Japan is a pure invention’. But instead, the comparative depth offered here - even in its 'quick takes' - in answering the ambiguities that people will always have about nations other than their own, does offer a particular service. There are many 'takes' on Japan, but as this book itself points out: ‘Getting to know Japanese culture is a lifelong endeavor’. It is perhaps, then, through the very accumulation of said ‘takes’ that we finally reach toward somewhere approximating a better, more genuine understanding.