Eating Wild Japan: Tracking the Culture of Foraged Foods, with a Guide to Plants and Recipes 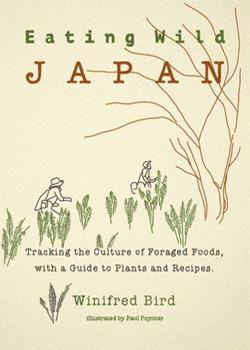 I have been wanting to read a book on Japanese wild food plants for such a long time that I have, in idle moments, thought of trying to write it myself. Luckily for everyone, journalist Winifred Bird has done all the hard work of researching, translating and learning from Japanese experts to compile the first English language book on this topic.

Previously a journalist for the Japan Times, Bird became fascinated with wild forage plants whilst living in rural Japan. Her interest is in the culture of foraging as much as the food it supplies. As such, the connection between people and plants is prioritised in this book; whilst it gives clear practical guidance, it is not a field guide or reference text. Each of the five primary chapters tell the stories of a different plant or plant group: wild mountain and forest herbs; horse chestnut; bracken; bamboo and seaweed. This is followed by a guide to other common forage plants, which gives detailed information on identification, preparation and recipes. Bird gives some substitute plants for readers outside Japan but unfortunately, most of those are North American rather than European natives. The final section of the book is a collection of recipes for all of the plants mentioned. For those of us that are more fluent in botanical Latin than Japanese, there is also a directory providing the Japanese, English and botanical names for common edible plants. This will be vital for many readers, as Bird primarily uses the Japanese names for plants. For those, like me, that are not familiar with more unusual plants like yomogi, oubayuri, hotokenoza, onigurumi, umizomen and so on, the liberal use of Japanese becomes a bit dizzying. I found myself frequently turning to google alongside the text, to make sure that I knew which plant I was reading about.

Bird spent three years travelling across Japan to meet the people that are still foraging for the plants in her five main chapters. Her journey took her from Kyushu to Hokkaido, and she writes evocatively of the wild places she discovers and the relics of traditional culture within them. Some of the plants and stories will be familiar to those with experience in Japanese cuisine but others are likely to be a surprise and I found that I was learning more about Japanese history than one would expect from a book about food.

Bird travels to Shiga prefecture to one of the few places where Japanese horse chestnuts (トチ, tochi) are still harvested and processed. In their fresh state, horse chestnuts (conkers) are highly toxic, in opposition to sweet chestnuts, which are familiar autumn fare in the west. It takes at least two weeks of processing to render tochi edible, after which they are used to make tochi-mochi, a rice/horse chestnut cake. Once a major food staple, there are now very few people that have the skills to process tochi and it is rare delicacy. A similar story is told of bracken (ワラビ, warabi). Young bracken fronds are a ubiquitous spring delicacy, but in Iwate prefecture it was common practice to make a calorie-rich starch from the roots until the mid-20th century, when industrial agriculture removed the need to search for food in the hills. As Bird explains, the cultural history of these plants mirrors Japan’s cultural history and sociological changes.

Although this is a warm and inspirational book, Bird’s underlying message has a haunting warning. As wild food’s place in diet has changed from being a primary calorie source to a luxury addition, the quality, variety, sustainability and security of the nation’s diet has decreased. As the skills and knowledge of foraging have declined, so society’s understanding and respect for the land around them has reduced. Bird argues that detachment from wild food – human’s original food – is directly linked to the destruction of the natural environment and the resultant loss of local community and culture. Although she does not discuss it at length, this pattern feels all too familiar in the UK, where industrial agriculture, processed food and supermarkets have replaced our knowledge of local plants and connection with our natural landscape.

Bird writes with clear passion for plants and people and so these important environmental and social issues are lightened with optimism. She meets activists who have been saving horse chestnut trees from the axe, reinstating wild food culture and reviving the satoyama landscape. She also takes time to compare the history of foraging culture in mainland Japan with that of Hokkaido’s native Ainu people, for whom wild food is still the heart of their culture. The lessons from the people she meets are that, although foraging culture and human knowledge of the natural environment is at a critical point, it is not too late. There is inspiration to be found here, whether you travel to Japan or not, to reconnect with the plants and food of your local area.

Despite the fact that the recipes are centred on wild foraged plants, I anticipate that UK residents would be able to make many of them by harvesting from the Japanese plants that are commonly grown in gardens. Bird includes dishes made from day lilies, the Japanese angelica tree (Aralia elata), Japanese spikenard (Aralia cordata), the royal fern (Matteucia struthiopteris), the ostrich fern (Osmunda japonica), and gingko. For anyone with a weedy garden, she also includes tips on preparing Japanese knotweed, mare’s tail (Equisetum arvense) and bracken, which sounds like a much better method of control than a strimmer or glyphosate. Many of the leafy greens she uses could also be substituted with plantain, dandelion, wild garlic, chickweed and other readily available British plants. Due to time and seasonal restrictions, I have only been able to try one of the recipes detailed in the book: a version of tochi-mochi using sweet chestnuts as a replacement for their more difficult-to-source cousins. There are no photographs for the recipes so I can’t tell you whether my rustic looking mochi turned out as they were supposed to, but they certainly tasted good.