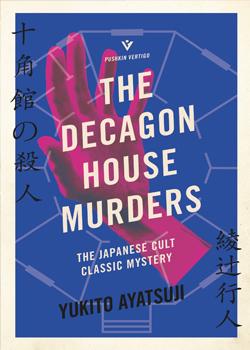 Despite revitalizing the classic murder mystery genre in Japan, and developing a cult following in the process, The Decagon House Murders is the first of Ayatsuji Yukito’s works to be translated into English. This is surprising considering how steeped the novel is in the Western “whodunit” tradition. And yet, the world Ayatsuji crafts is also distinctly Japanese. The result is a lyrically woven natural setting, combined with the page-turning suspense emblematic of a quality murder mystery. This makes for a captivating read, culminating in an ending as satisfying as it is shocking.

First published in 1987, The Decagon House Murders had a huge part to play in revitalizing the honkaku, or orthodox sub-genre of murder mystery novels in Japan. Its place in the Japanese canon, with regards to mystery novels, cannot be understated. But from another perspective, the parallel between this novel and Agatha Christie’s seminal work And Then There Were None is also made plainly obvious. Indeed, it is worth noting that Christie’s novel was released under the title ‘Dead Island’ (死人島) in Japan. What’s more, mid-way through, a character makes explicit reference to the events unfolding being similar to Christie’s novel; a clever postmodern move by Ayatsuji to remind the reader to approach the book as a mystery to be solved and not merely a story to be read.

The book opens with the inner thoughts of a deranged character, staring into a choppy sea hell-bent on passing ‘Judgement’. From there, we follow seven students of the K- University Mystery Club as they travel to the desolate island of Tsunojima, the sight of a gruesome murder-suicide six months earlier. Instantly, the cogs in the reader's mind begin to whir; the puzzle Ayatsuji has crafted is beginning to take form.

On the island, the group settle down into the Decagon House, designed by Nakamura Seiji who died in the brutal murders. The group, who go by names drawn from Western murder mystery greats such as ‘Ellery’, ‘Carr’ and ‘Agatha’, spend much of the first night exploring the ruins of a burned-down mansion that was the sight of the murders. In the Decagonal hall, they postulate on various theories, and generally get excited for a week of hypotheticals. These conversations serve Ayatsuji’s purpose, which is chiefly to frame the events of the book not as a novel but as a puzzle. By and large the dialogue between the characters is instrumental, to aid the reader in their personal unravelling of the plot. At times, Ayatsuji could be accused of under-developing the personalities of the affectatious group of students. Clunky turns of phrases are not uncommon. However, what The Decagon House Murders lacks in convincing, engaging dialogue it makes up for in cerebral twists and turns.

As the group begin to recognize the danger they face, on the mainland former Mystery Club member Kawaminami (or ‘Doyle’) receives an ominous letter. Signed off by the deceased Nakamura Seiji accusing the club of murdering his daughter, this letter sets in motion a series of events that propel the plot forward at breakneck speed. From this point, the split narrative between Kawaminami’s investigations on the mainland and the carnival of death on the island make the reader ponder and doubt each development. This book's greatest asset then is in its structure. As the amateur sleuths on the island try to figure out which one amongst them is the murderer, and those on the mainland begin to unravel the grizzly past of the Nakamura’s, the reader is left both clued up and mystified. Therein lies the genius of Ayastuji’s cult classic. Even with the benefit of a narrative structure that lets the reader in on far more information than any one character in the novel, you are unlikely to ever feel certain throughout the book that you know who did it. And if you do, chances are you will be proved wrong.

As the bodies begin to pile up, and the list of suspects shortens, a lesser mystery novel may struggle to hold the reader's imagination. In the latter stages, Ayatsuji really comes into his own. As the book builds towards its crescendo, the descriptions of the natural surroundings become poetic and ominous, in the tradition of the greatest Japanese literature. The use of pathetic fallacy as the book reaches its climax is expertly done, painting a vivid, brutal image. And then, the solution to the novel’s puzzle unfolds in a way so ingenious and logical it can stand shoulder to shoulder with the very best mystery novels. If you wish to read a book that will grip, shock and engage you in equal measure then you need to look no further than The Decagon House Murders. As authors like Murakami Haruki and Yoshimoto Banana have given the British reading public a real taste for a certain type of Japanese fiction, the release of Ayatsuji Yukito’s debut novel may signal the arrival of a new wave of Japanese mystery novels onto the British market. I believe the literary scene in this country would be all the better for it.