Age of Samurai: Battle for Japan 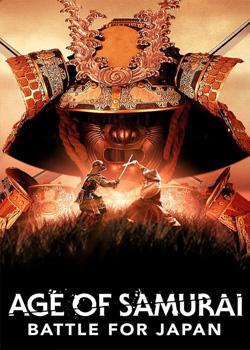 Age of Samurai: Battle for Japan, a six-part Netflix historical documentary series, retells the final decades of the Sengoku Jidai, a 150-year period of near continuous civil war. Seventeen historians speak on the show, examining the reunification of Japan through the rise of three figures: Oda Nobunaga, Toyotomi Hideyoshi, and Tokugawa Ieyasu. Beginning in 1551 with the death of Oda Nobuhide and the rise of his son, Oda Nobunaga, the show ends in 1616, with Tokugawa Ieyasu’s rise to power and the beginning of the Tokugawa Shogunate.

The samurai and Japan’s feudal era (1185-1868) have long become locked in Western imagination through media, film, and books, with each reconfiguration inspiring another. The Magnificent Seven would be the most obvious, an Old-West remake of Akira Kurosawa’s Seven Samurai, while films like The Last Samurai, the book Shogun by James Clavell, or even the game Ghosts of Tsushima, further rework these imageries. It might be remiss to reference these fictional works in relation to a documentary series, for there is no real expectation for the former to be grounded in historical accuracy. But in the case of Age of Samurai, a documentary which repackages myth as history, and which uses tropes to advance a two-dimensional narrative, the comparison is warranted.

In interviews, the show is clear in having taken inspiration from these fictional reworkings, specifically from Kurosawa’s films, Game of Thrones, and manga. Thus, each historian is shown in black and white, sitting centred and looking directly into the camera, while dramatic re-enactments occur in desaturated hues. Scenes changes are signalled by the camera panning across a drawn map, upon which protagonists’ faces appear and disappear often in a wash of red blood. The effect of this, if you like it, is fun, drawing on the aesthetics of fictional blockbusters that audiences of both Japanese and Western film, and readers of manga, would recognise. But focusing entirely on this imagery risks diluting the legitimacy of the show.

Legitimacy is further weakened by editing choices which disrupt the narration. Seventeen talking head interviews are too much, and the editing - cutting up each historians’ contribution into second-long sentences which often repeat each other - creates a confused and inefficient narrative. Distracting metaphors and hyperbole also litter the show: each battle is described as the biggest in Japanese history; the katana is described as “widely regarded as probably the finest sword made in world history”; and the samurai are referred to as “probably the greatest warriors history has ever known”.

This disjointed narrative could be the result of the directors’ vision. In an interview, Age of Samurai’s showrunner Matthew Booi says that ‘the biggest challenge filmmakers have when telling big-picture history is, how do you avoid chronology? Chronology isn't entertaining’. While this is said to stress the aim of the series to showcase the role of a few central figures, it seems the “big picture” is retold at the expense of wider social and political context needed for the plot to make sense, or basic detail and nuance necessary to build a historically accurate and logical narrative.

The big-picture storyline also leans on the trope of the honour-bound but violent samurai, seemingly for entertainment value rather relevance or accuracy. Episode four, for instance, dedicates over three minutes to a dramatisation of Date Masamune ripping out his own eye because of the shame associated with a physical impairment caused by smallpox, which seems superfluous given that this event exists only in legend. The seppuku (a form of suicide) we see generally last over a minute, while a scene of a child being beheaded in front of her mother is reused four times over two episodes. The violence feels gratuitous and largely unnecessary as the series rarely explains the broader context of why these killings are happening beyond abject violence or defending honour and legacy.

This trope of honour and violence is a mythical political symbolism layered onto modern media reworkings of the samurai, a myth intertwined with Japanese nationalism. The samurai were reimagined initially by Nitobe Inazo in 1900 in his English-language book Bushido: The Soul of Japan, which drew fictional associations between samurai and a benevolent, intrinsic honour-code. Later, this concept would be reimported back into Japan and layered onto the nation’s feudal era, and would ultimately be used by the imperial government to force Japanese soldiers to fight until death in the wartime period, bound to this invented historical legacy.

Many fictional interpretations of this era have fallen into this pattern: in The Last Samurai, Nathan Algren is bent on defending traditional samurai honour, while in Ghosts of Tsushima, bushido defines the protagonist’s development as he makes decisions between staying true to this honourific code, or betraying it through dishonourable acts. Bushido is not so overt in Age of Samurai: although the historians occasionally lead with these mythologies, for instance referring vaguely to ‘the ancient traditions of the samurai’, they do not explicitly mention the term. The samurai’s relentless violence and brutality certainly comes through, and there is no doubt that these were anything but a peace-keeping caste.

Notions of “honour” nonetheless underly the show. In an interview, Matthew Booi says of the period that there was, ‘a mix of unbelievable violence with incredible honor and duty … [an] obsession with honor and legacy’. The concept thus comes through with much screen time devoted to long, drawn out seppuku and battles tending to end with the commander committing seppuku to avoid a dishonourable death. In other events, power-grabs are conceived through protagonists wishing to preserve their legacy. There is little other explanation of motivations or drivers of events and individuals, dulling the narrative and ultimately reusing these worn out, mythical tropes of honour and duty.

A final oversight: gender. Of the 17 historians, only two are women, Lesley Downer and Tomoko Kitagawa, who speak solely on women’s history. Each historian has been selected for a specific area of expertise: Elijah Bender, for instance, speaks mostly on the clash between Oda Nobunaga and Takeda Shingen, while Nathan Ledbetter talks on the Battle of Nagashino. However, because each contribution is limited to single sentences, often repeated by the next speaker, attributing specific knowledge to individuals becomes difficult. It is thus hard to understand the logic of keeping women’s history to solely women historians, who have broad subject knowledge and expertise. The female storylines in the show, too, seem very watered down; the women exist solely as wives and concubines, draped half naked on a futon, having sex with a man, or screaming as they, or their child, are being brutally murdered. Lady Chacha, wife to Toyotomi Hideyoshi, is the only woman given some depth, and the only one who is given any dialogue.

Age of Samurai is a show defined by a Western, male optic, and could be suitable for an audience new to Japanese history, but historical inaccuracies aside, it seems it would be a difficult watch for anyone given its male centrism, gratuitous violence, and confused plotline. Without wider political and historical context, an entire period is ultimately portrayed as a purely barbaric time in history with key figures driven only by an inherent urge for abject violence and a sprinkling of honour.