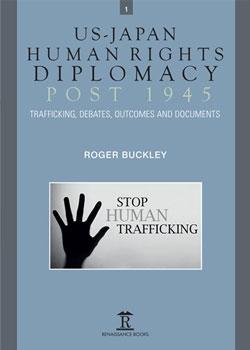 The UK government defines “human trafficking” as ‘the recruitment or movement of people, by the use of threat, force, fraud, or the abuse of vulnerability, for exploitation’. It is related to, although not identical with, on one hand “modern slavery” which may, but does not necessarily involve migrant labour and on the other “people smuggling” where the migrants may be more or less willing participants in the process.

These terms are notoriously difficult to define or ascribe numbers to but if a problem cannot be quantified it is not possible to assess whether interventions are effective. The Walk Free Foundation has worked with the International Labour Organisation and the International Organisation for Migration to develop the Global Slavery Index (GSI) which ranks countries according to the prevalence of modern slavery as part of its work to agitate for its elimination. The GSI report of 2018 shows Japan to be at the bottom (top?) of its international league table - 167th out of 167 – with an estimated 37,000 people living in slavery compared, for example, to 403,000 in the US ranked 158. Nothing to see here then? Well, not quite. Not, obviously, if you are one of the 37,000. Moreover, some argue that at least some elements of modern slavery in Japan result from the state sponsored Technical Intern Training Program (TITP) which is less about training in transferable skills for workers from developing countries than providing cheap labour to address acute shortages in low skilled sectors in ways that enables worker exploitation and human rights abuses through a system that amounts to  “trafficking”.

The USA passed the Trafficking Victims Protection Act in 2000 and in 2001 issued its first report to bring international attention to the ‘horrific practice of trafficking in persons’. The report describes the situation in each country and places them into one of three tiers: Tier I those which fully comply with the Act's minimum standards, Tier II those which do not yet fully comply but are trying, and Tier III who are judged to neither comply with the minimum standards nor be making any significant effort to do so. In 2002 the Japanese government was shocked to find that it had been placed into Tier II. This report noted the two issues of women trafficked for commercial sexual purposes and men trafficked for labour purposes. After being promoted to Tier I for a short while, the 2020 report placed Japan once more into Tier II noting inter alia cases of forced labour existing with the TITP schemes.

Roger Buckley provides an analysis and set of documentation to allow us to better understand the historical context to these developments. Specifically, ‘to examine how the US has deployed public diplomacy with Tokyo to confront Japanese sexual and labour trafficking, while also charting the successes and failures of the US’s own record’ (p. 1). Volume I of this two volume set begins with just over 100 pages of historical perspective and assessment starting with the immediate postwar period and ending with a postscript that brings the narrative up to April 2021.

This section is excellent particularly the first chapter which elegantly summarises the postwar rise of the discourse of human rights and the way this became embedded in various United Nations (UN) documents and practice from the 1940s through into the twenty-first century. Chapter 2 looks at the way these standards were incorporated into Japan’s new constitution largely at the insistence of the US occupiers. This is an area that Buckley is well qualified to write about having published extensively on the occupation period. Nevertheless, there was more that might have been written about the role played by domestic advocates of human rights. It is well documented that article 25 on social and economic rights was largely included as a result of pressure from the Japanese Socialist Party. Subsequent chapters trace the development of anti-trafficking policy in the US and Japan across the twentieth century before discussing at greater length developments since 2000. Clearly it is these recent developments that most interest the author and probably most of his readers, but I wondered about the influence of the UN system on Japan’s human rights policy making from the 1990s onwards. For example, Japan's engagement with the reporting processes prescribed by the international conventions on rights generally and women and children more specifically. Surely there were some references in Japan's reports and the UN committees’ comments on them to trafficking issues?

And what about the absence of a Human Rights Commission (HRC) in Japan despite several promises made in the late 1990s to create one? A truly independent HRC might have taken up the trafficking issue and indicated problems with the TITP from an early stage. It might also have suggested early ratification of the UN Trafficking Protocol of 2000 something that did not take place until 2017, typically late and then with reservations that did not make human trafficking an offense in criminal law.

The explicit comparison of the US with Japan is very helpful. The US is described as providing ‘leadership’ and Japan engaged in ‘catch-up’ – but was there anything distinctive in their relationship in this policy area? And does the relationship remain the same today?

On the documents which make up three quarters of the two volumes: I wondered how many of them were needed now that most readers have internet access. Certainly, all the documents in the second half of Vol I, the Japanese constitution, the texts of the Universal Declaration of Human Rights and main covenants and conventions are readily available on-line. Readers could have been given the website addresses if they wanted to check them out for themselves. The same may not be true for the documents in Vol II as some of them may be more difficult to locate. Often only the most recent report is available and sometimes older reports are actually made more difficult to access. Still, even there the inclusion of the website addresses where a reader can access these documents for themselves might help them locate subsequent years reports.

Overall though this is a handsome two volume set that introduces the reader to the debate on a serious human rights issue that is rarely covered by English language sources. It not only provides a background commentary introducing readers to the main contours of the problem but also provides them with ample material enabling them to conduct further research themselves. Japan’s record in this policy area may be good by international comparison but Buckley makes clear that there is still more that it needs to do to be accepted as a Tier I nation.