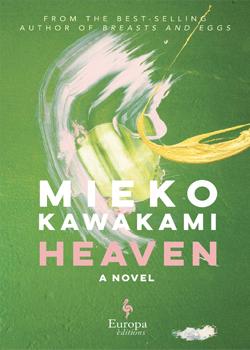 Heaven was originally published in Japan in 2009, winning the 2010 Murasaki Prize for Literature. It was translated into English by Sam Bett and David Boyd in 2021. It predates Breasts and Eggs as well as Ms Ice Sandwich.

In Heaven graphic and extreme teenage bullying takes centre stage which makes for uncomfortable reading at times. The book is set in the early 1990s, before the advent of the internet and online bullying or trolling.. The novel is also an exploration of friendship and its limits, victimisation, morals, religion and ethics. It is undoubtedly a thought-provoking book, which I continue to digest months after having read it.

A shared experience of torment and harassment brings together two 14-year-old classmates. Kojima is bullied by the girls while the unnamed narrator, nicknamed Eyes for his lazy eye, is mercilessly bullied by the boys. He is, amongst other things, made to swallow pond water, toilet water, a goldfish, and scraps of vegetable from the rabbit cage. The bullying gets far worse.

The girls pick on Kojima “for being poor and dirty”. They don’t realise that Kojima is intentionally unclean. It is her way of connecting with or evoking her impoverished beloved father who was divorced by Kojima’s mother.

The bullied teenagers bond when Kojima begins leaving anonymous notes for Eyes. Initially he thinks one of the bullies is tricking him, but plucks up the courage to meet the correspondent. Eyes and Kojima secretly meet from time to time while hiding their friendship at school. They derive enormous strength from meeting and talking, while ignoring each other at school.

It makes utter sense that Kojima would want to take Eyes to visit “Heaven” to find respite from the relentless bullying which they are subjected to at school. They don’t quite make it there, but we get a vivid impression of what Heaven is and what it means to Kojima. (I will leave it up to the readers to find out more about this Heaven.)

In the same way that Kojima tries to rationalise why and how her father ended up living by himself after all the hard work he did for his family, she wants to attribute some kind of meaning to the bullying which she stoically withstands. “I have to believe there’s some kind of god, who sees everything that happens and understands the meaning of everything we’ve been through when everything is over.”

Eyes listens to Kojima and tries to make sense of what she says while also trying to work out his own stance. Though their views begin to diverge, Eyes will always treasure Kojima: “I never had another friend like her. She was the only one.”

In an interview with Izzy Smith, Kawakami Mieko reveals that she took inspiration for the book from Nietzsche's Thus Spoke Zarathustra in exploring the callousness of youth and how the meek survive in a society that favours the strong. Kawakami says that  ‘we have a tendency to categorise people as strong or weak” whereas “weakness is really what’s at the core of, or a fundamental part of humanity’. ‘Everyone is born as a powerless infant, and then they pass away in a similar position of vulnerability’.[1]

Though bullying and discrimination remain intractable societal issues, which need to be discussed, Kawakami does so in an unremitting manner which can be exhausting. Nothing is left to the imagination. Perhaps that was Kawakami’s intent so that readers can really begin to understand the true horror and banality of bullying.

There are times when Kojima’s stoicism, veering on the masochistic feels rather extreme, yet Kawakami’s characters are, at the same time, believable, young, complex, still developing and, at times, rather toxic.

Despite finding the novel a little adolescent in places, particularly in its attempts at philosophical discourse, it provides many positive moments of reflection and I admire Kawakami for making us think with empathy about the vulnerability of our infant and elderly selves.

As with Breasts and Eggs, and in a similarly redeeming way, this novel ends with hope and human agency. Eyes continues to ponder the meaning of existence while actively embracing light and knowledge.

He decides to talk with his stepmother about the bullying and makes a potentially life-changing decision the immediate results of which lead him to say, ‘Everything that I could see was beautiful. I cried and cried, standing there, surrounded by that beauty, even though I wasn’t standing anywhere. Everything was beautiful. Not that there was anyone to share it with, anyone to tell. Just the beauty’.

Join us on Monday 13 December 2021 for a informal online discussion of Heaven in our monthly book club.