British Extraterritoriality in Korea, 1884-1910: A comparison with Japan 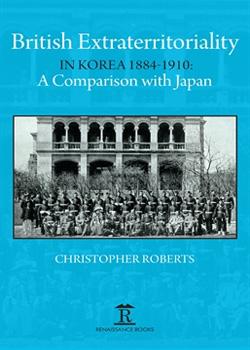 When most of Japanese people hear the word “extraterritoriality”, or “consul jurisdiction”, it may remind them of history classes at high school. The narrative there is one related to an oppressive regime compelled by the Western powers and the eventual recovery of the Japanese nation’s sovereignty through two glorious victories over Qing China and Russia. On the other hand, Korean readers may recall the bitter history in which their nation was yoked under the pressure and subsequent colonisation by Japan which by itself turned to the vanguard of Western imperialism. What is common among those narratives is the view that extraterritoriality is an unequal and imperialistic legal regime which was imposed upon them, ignoring their sovereignty.

Christopher Roberts, the author of British Extraterritoriality in Korea, 1884–1910: A comparison with Japan, does admit that British extraterritoriality had some discriminatory and unequal aspects. For instance, in the notorious Normanton incident, the British captain of a sunk ship who, though rescued most of the British sailors failed to rescue most of the Japanese passengers, was punished unconventionally lightly in a consular court. However, the excellence of this book is that it enables us to take a glimpse of the complexity of the reality beyond the simple state-made narratives through extensive research on various first and second materials, mainly from the British side.

Written by a British lawyer who resided in Tokyo and Hong Kong, this book offers valuable descriptions both for historians and legal scholars. For historians, a rich description of the correspondence among British consuls and diplomats from the national archive offers a great perspective on the reality of British colonial bureaucracy. Especially, as personnel management is always the keystone to comprehend the work of bureaucracy, deep analysis on the careers of the people involved in British diplomacy in Korea is very attractive. For example, readers may find it interesting that as the Minister to Korea actually never resided in Korea and concurrently served as either the Minister to Japan or China, it was a natural consequence that British Korean policy was influenced by which Minister was serving as Korean Minister. Consuls also had their colours either of Japan or of China — and Britain never tried to bring up their own “Korean experts”. Rather surprisingly, the British Foreign Ministry even rejected the proposal from one official fluent in Korean language, vice-consul Scott, to create an English-Korean dictionary. Scott was promoted to vice-consul of Shanghai soon and never came back to Korea. As the author iterates, it is certainly true that Korea had not been important for the trade strategy of the British Empire. All the same, the number of British ships which called at Korean ports were strikingly so small that one may assume that this extreme indifference to Korea by the central government may have accelerated British merchants’ avoidance of Korean ports, and thereby might have resulted in further growth of Japanese economic influence there.

From a legal perspective, extraterritoriality is by itself a very unique invention of international law. As globalisation encompasses the imbalance of power and wealth among states in reality, it is sometimes inevitable that an “advanced” legal system and “indigenous” one virtually coexist within one territory — and we still do not know the right answer to deal with the situation. Extraterritoriality was the answer of the British Empire, which is apparently different from the currently widespread “Washington-consensus” type answer to force other countries to change their legal systems themselves. Before supposing that the system of extraterritoriality contradicts the sovereignty of states and was destined to fail, it might be worthwhile observing British efforts to keep it working and the different responses to it by Asian countries.

Indeed, trials and errors of British diplomacy depicted in this book tell us how it is difficult to draw a boundary between two coexisting jurisdictions. The principle of extraterritoriality — the defendant’s nationality determines the jurisdiction — seems simple, but examples in this book show that there were lots of grey-zone cases. However, as Britain noticed that the success of their  “informal empire” was dependent upon the success of the extraterritorial system, they treated especially careful the issues around extraterritoriality, such as protection of other foreign nationals or of British-related Koreans, to neither expand nor concede their rights too much. It is rather symbolic that the age when the last extraterritoriality disappeared in China, 1943, was almost simultaneous to the cessation of the British Empire.

One of the fundamental issues of extraterritoriality is whether consular jurisdiction applies to the cases of administrative regulations — especially when Westerners allegedly violated local administrative regulations such as quarantine rules. As the Treaty of Yedo (Ansei Treaty) with Japan did not clarify this point, Meiji Japan asserted that consular jurisdiction only applied to civil and criminal cases, insisting that it would become impossible to execute administrative regulations properly if the Japanese government needed to explain all such regulations to foreign consuls. As the author points out, learning from this dispute, Britain clarified with the Korean government that local administrative rules were not applicable to British subjects and premises unless agreed otherwise when concluding their treaty. However, this seemed to have revealed another problem: as British jurisdiction enlarged, native Koreans rushed to seek its protection from local authorities by leveraging their connection to British subjects and entities, such as British employers or missionaries. The present author attributes this difference between Korea and Japan — that is, Japanese were eager to erase extraterritoriality while Koreans rather leveraged it — to cultural factors and administrative capacities, but does not give satisfactory explanations. It is certainly a matter of further research what factors drove Japanese, Korean, (and Chinese) responses to the inherent matter of extraterritoriality to draw a boundary between coexisting jurisdictions.[1]

The only thing regrettable about this meticulous research is that there is still room for further investigation of Japanese or Korean-side materials. Although the author seemed to think it did not create any problems, this research sometimes falls short in explaining motives and backgrounds of Japanese or Korean governments’ policies in comparison to the great explanation on British policies, perhaps because of the author’s overdependence on the newspapers written in English. In addition, if I may point out a trivial mistake for the benefit of readers and for the honour of the best-known Japanese admiral, the name of Admiral Togo was misspelled in p. 105 — although the readers familiar with Japanese history will immediately notice.

Watch the recording of our online lecture with author Chris Roberts who presented his latest publication British Extraterritoriality in Korea, 1884–1910: A comparison with Japan on Monday 19 July 2021.