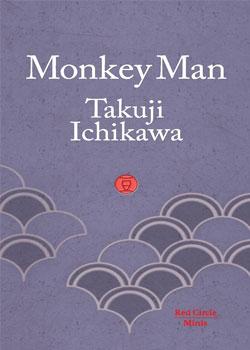 By Ichikawa Takuji
Translated by Lisa and Daniel Lilley

'Kids like us who have been picked on; we all share that same desire to become heroes. Hideto calls it Peter Parker Syndrome’.

For the millennial protagonists of Monkey Man - the latest in publisher Red Circle's collection of Japanese mini fiction - brought up on a diet of video-games from Sony and Nintendo, in a world that seems with every passing day closer to an inescapable tipping point, the generational divide has never seemed more gaping. But can they really bring about tangible change? Around the world, teens are becoming addicted to an altruistic video-game called Babel, focused on love and kindness. It seems like a mirror to the violent, greedy harshness of reality. As one young gamer puts it:

'Older generations don't even give it a second glance. Forming teams to kill and other such games are better left to old blokes who live in the world of Stone Age CPUs. Our generation is cooler and smarter than that'.

With the young and the old split between seemingly incompatible world views, the outlook appears bleak:

'People all over the world are suffering from all sorts of cognitive malfunctions. They've lost the primary ability of reason and are easily swayed by anything that appeals to and cajoles their more primitive basic instincts... Humankind has lost its essential moral character'.

But there is more to this conflict than meets the eye. Like a Japanese spin on the X Men, 'awakened' youths (a knowing nod to contemporary 'wokeness' perhaps?) with special abilities are being gathered together in an institution. Hideto has extreme intellect, Tengo boasts superior physical abilities, Ran is a computer whizz, while the narrator of the tale - Yuri - has the ability to heal wounds. Behind the scenes, a shadowy organisation known as The Complex seeks to exploit their abilities. But someone, a masked avenger - the titular Monkey Man - is hell bent on fighting back.

This is not the first release of Ichikawa's in English. His story The Refugees’ Daughter was an earlier Red Circle publication in 2019, while Be With You - a million-seller in Japan, but now unfortunately out of print in its English translation - was put out by VIZ Media (better known for their manga releases) all the way back in 2006 and saw numerous multi-media remakes including a film and TV drama. In all instances, Ichikawa's knack for imagination, thought-provoking plot gambits and parable-like tales has made him one of Japan's most unusual authors.

It is almost too tempting, when discussing Japanese literature, to make comparisons to Murakami Haruki, but in terms of the opening movements of Monkey Man, it's a comparison that fits (there's even an open reference to Norwegian Wood itself). The breezy first person style and the sheer uncanny verve are warmly familiar in the manner of the best of Murakami's short story collections. What marks Ichikawa's prose out as different, however, is an eye for social conscience and big ticket themes - with the text brushing up against issues as diverse as consumption patterns, climate change, activist groups and conspiracies about a global virus. Ichikawa deals firmly with fantasy, but it is always resolutely grounded in the painful realities of the here-and-now.

Much of Monkey Man's premise will feel familiar to fans of manga and anime - the kind of video-game-esque plot premise it flirts with remains singularly dominant in Japanese popular media right now. But Ichikawa's clever world-building can also be read as part of a wider oeuvre. Increasingly over the past decade, some of the most striking, biggest successes in world science fiction have come from Asia - the likes of Cixin Liu's remarkable Three Body trilogy chief among them. The time is ripe - with sales of translated literary fiction in particular seeing double digit percentage rises in the UK in recent years.

In this respect, praise should also go to the translation by Lisa and Daniel Lilley, which is sensitive in feel, handling Ichikawa's dialogue and wit with clear capability. The overall tone is well judged - capturing the wide-eyed charm of the teen characters without feeling overly stagey or stilted. Ichikawa is an author engaged with serious themes, but as his mega-selling success in Japan shows - he certainly isn't without the ability to inject the essence of 'popular' prose either. Occupying an ideal sweet spot, Monkey Man takes a pick and mix approach, flitting between biting social satire and laugh-out-loud observations of high-school romanticism.

What this slim volume aims at is a modus operandi in which neither sci-fi or teen protagonists feel shackled to the stigma of cheap “genre” fiction, but instead inject the excitement and ideas of genre works into a refined, 'quality' sphere of literary zeal. Even when the story's final third transitions into a kind of high-stakes action set-piece straight out of a Hollywood thriller, it continues to offer up the philosophical thought-play by way of a side order. A brief afterword from Ichikawa reaffirms this, in which the author lays out a powerful manifesto of his work as 'tales of the voiceless, the weak and the oppressed' and a belief in the power of narrative fiction to change the world.