Hokusai and His Age 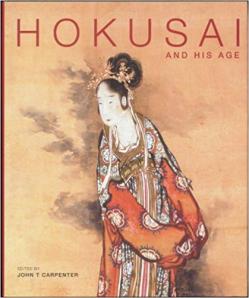 If you were to ask someone who was neither a student of Japanese culture nor an art historian to name a Japanese artist it is likely that he or she would mention first the name of Hokusai. There can be few people who have not seen images of Hokusai’s famous print of a towering wave with Mt Fuji in the background. But many students don’t realize the wealth and breadth of Hokusai’s work. This volume should help to fill this gap.

Hokusai (or Katsushika Hokusai to give the full name by which he is generally known) lived from 1760-1849. He was, as John Carpenter writes in his introduction, “a polymath of Edo visual culture.” The artist who called himself the “Man Mad about Drawing” “had an inimitable ability to tap into the most vibrant intellectual trends of his age.” His popularity in the West began as soon as contacts were opened with Japan. His gifts were recognized by Monet and other European artists, but to many of the Japanese who led the Meiji revolution from 1868 his prints were cheap and his work was bound up with the merchant and popular culture of the Edo period which was despised by the aristocrats and the samurai. This attitude now finally seems to be changing. Quite recently the Japanese Cultural Affairs Agency has been willing to designate works by Hokusai as important cultural assets.

This volume brings together essays by fifteen specialists in Japanese art. Part I includes seven studies of paintings by Hokusai and his pupils. Part II which contains a further eight essays considers aspects of Hokusai’s achievements as a print artist and book illustrator. It has been published in cooperation with the International Hokusai Research centre, University of Venice, the Sainsbury Institute for the Study of Japanese Arts and Cultures at Norwich and the Art Research Center, Ritsumeikan University at Kyoto. All the contributors are expert scholars who have meticulously researched their fields and references are fully recorded in the endnotes to each chapter. The illustrations which have been carefully selected are well reproduced and include a number which have never been published before.

The book includes an analysis by Asano Shūgō (Chapter 6) of Hokusai’s signatures and seals and explains how Hokusai’s works were copied. It will be an essential work of reference for art experts and historians. But while the book is not another introduction to the works of Hokusai for those with a general interest in Japanese culture it contains much fascinating material for the student of art and of Japan in the Edo or Tokugawa period (1603-1868).

Among such a rich selection it is difficult to choose particular highlights for a brief review. The following are some of the aspects of this fascinating book which particularly appealed to me.

Roger Keyes in the first chapter discusses some of Hokusai’s early paintings. I was struck by a painting from 1794 of Zhongkui and Demon (Red Shōki) (plate on page 21). John Carpenter who is an expert in Japanese calligraphy writes in chapter 2 about the interaction between images and texts in Hokusai’s early paintings of Japanese beauties (biji 美人). He notes that in pre-modern Japanese painting people “were almost always portrayed with their faces turned slightly to the side” which was a position “most amenable to the depiction of a person’s features” (page 39), but Hokusai was also prepared to paint frontal views as in the charming painting of a young courtesan in long sleeved robes of c.1804 (plate on page 41) inscribed with a poem by Yomo no Magao.

The third chapter, by Naitō Masato, deals with “the manipulation of form in Hokusai’s paintings of beauties.” One fine painting of “Two Beauties” (plate on page 64) underlines Hokusai’s mastery of composition. Naito notes (page 65): “The two women in this painting, deliberately placed in complex overlapping forward and back positions, create a three dimensional arrangement.”

Timothy Clark of the British Museum comments in chapter 4 on “Frilly Undergarments: Some Paintings by Hokusai’s Pupils.” This is followed by an essay in chapter 5 by Kobayashi Tadashi on Ukiyo-e paintings by Hokusai’s daughter Ōi. Her Night Scene in Yoshiwara (page 97) is a masterpiece which “captures the conflicting realities of life in the brothel district through the expressive use of light and shadow.” In chapter 6 about Hokusai’s seals, by Asano Shūgō, I marvelled at the Tiger in the Snow (page 129) which has the seal (white on red) for the character meaning one hundred 百. In chapter 7, Gian Carlo Calza discusses “Imitations, Copies and Fakes after Paintings by Hokusai.” An interesting example of probably mistaken attribution to Hokusai is the well-known and appealing image in the Freer Gallery in Washington of Mt Fuji and Fisherboy in a Willow Tree (page 138). An artist involved in creating copies of paintings by Hokusai was the artist and collector Kawanabe Kyōsai (1831-89), who also often declared his ownership of a painting in writing on the back or sometimes on the front of a work.

Part II is equally varied with many interesting articles. Kobayashi Fumiko in chapter 8 investigates the publishing activities of poetry groups in Edo and the development of surimono (刷り物 literally printed matter, a term used to describe certain small size prints). Kubota Kazuhiro writes in chapter 9 about Hokusai as a surimono artist and his relations with the Kyōka (狂歌 literally “mad songs” or satirical poems) poets in Edo. Out of the many surimono illustrated in these two articles I thought the two on page 167 by Hishikawa Sōri of a young woman admiring plum blossoms and by Chōseisai Teishi of a courtesan with an Adonis flower particularly charming.

In chapter 10 Doris Croissant discusses changing concepts in still-life paintings by Hokusai and Takahashi Yuichi, a late nineteenth century artist painting in a western style. She also draws attention to western style elements in works by Shiba Kōkan in the late eighteenth century and by Hokusai who may have learnt some elements of western composition from Shiba.

In chapter 11, Henry Smith II discusses the “blue revolution” which was an important element in some of Hokusai’s masterpieces in his series Thirty-Six Views of Mt.Fuji. Ten of these prints were, he points out, issued in aizuri mode using only blue in several shades. Smith notes (page 235) that “During the Bunsei period of 1818-30, blues seem to become steadily more varied and prominent, and then suddenly a strong blue light emerged as the dominant colour of the Japanese print in about 1830…This ‘blue revolution’ was most conspicuous in landscapes.” He regards the Thirty-Six Views as the “crucial catalyst.” Before the appearance of the colour which he calls “Berlin blue” (in English often called ‘Prussian blue’) the two basic mineral pigments available in Japan for printing “provided rich hues but only in particle sizes that were too coarse to yield smooth colours when printed with woodblocks.” They were also too expensive to use to produce large numbers of prints. A fine example of the use of Berlin blue is the fan print by Kōchōrō Kunisada of Mt Fuji from the shore at Miho on page 253.

One of the most interesting chapters is chapter 13 by Professor John Rosenfeld who discusses “the anatomy of humour in Hokusai’s instruction manuals.” Hokusai was undoubtedly one of Japan’s greatest humorists. As Rosenfeld explains (page 301) “Hokusai maintained the pose of a jester to the very end of his career” but “the most abundant and varied forms of humour appear in volume 12” of Hokusai’s Manga ( 漫画 ). “Upon opening the book, the reader sees a double-page spoof of the Seven Lucky Household Gods (page 303).” Hokusai believed that “jokes should come rapidly, continuously and with a cumulative effect.” A good example of his burlesque sense of humour is his page depicting fat people in various poses (page 304). He pokes fun at over solemn priests (see page 316) and indulges in scatological humour in his depiction of the samurai obviously performing in the privy while his retainers outside hold their noses (page 319). Rosenfeld points out that Hokusai “challenged the values of Japan’s cultural and political establishments… His puns and burlesques undermined the serious discourse of Tokugawa state values and rules of social behaviour. His were statements of radical individualism, of irreverence, and of wide-ranging inquiry.”

In the penultimate chapter, Timon Screech writes about Hokusai and the icroscope thus tying him in with Dutch studies (Rangaku) which in the Edo period were Japan’s window to the western world. The final chapter is a piece by Tsuji Nobuo on “The Impact of Western Book Illustration on the Designs of Hokusai – The Key to His Originality.”

There is much in this handsome book to enjoy and to instruct.