Toward Creation of a New World History 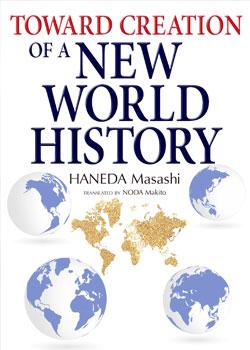 To paraphrase Benjamin Disraeli, World History is a career. As we witness the rise in many departments around the world of MA and PhD programs, specialised conferences, funded chairs, and research institutions on transnational and global topics, it is safe to say that World History has become one of the most popular fields of research. Nevertheless, the dominance of national history in academic departments is still far from being challenged. It took about a decade for World History to reach such heights. When Professor Haneda Masashi first wrote Seikaishi he (the original Japanese title of the book) in 2011, he probably did not expect that the subject would have become so ubiquitous so rapidly. In the past decade Haneda has been at forefront of the institutionalisation of World History as one of the main subjects in the Global History Collaborative, one of the many emerging international research consortia, which includes Harvard, the University of Tokyo, Humboldt, and Free universities in Berlin and the EHEES in Paris.[1] In terms of scholarship as well, the so-called transnational turn has sparked a wave of major works about world, global and transnational history.[2] Overall, it seems that all kinds of historical fields and methodological school are coming to terms with the non-national dimension of their research.[3]

In this short book, which I would look at almost as a manifesto for Japanese World History, Professor Haneda argues that today’s World History as taught in Japan is simply not realistic anymore. He exposes three World History main issues in Japan, although arguably these problems are shared to many other countries too. First, World History as taught in Japan is one for the Japanese people, that is, it reflects the country’s own bias (p.63). Secondly, Japanese World History puts too much emphasis upon the differences between people, countries, and civilisations (p.75). Thus, encouraging the alienation of the non-Japanese other. Lastly, World History in Japan is too Euro-centric (p.81). The final issue, he points out, is shared with the rest of the world, since it is something imbedded within the very fabric of the modern historical profession. How does he propose to surpass these issues? He proposes that an ideal World History as such: 1) it does not stress differences and it does not encourage othering; 2) it is not centred upon any specific region or country; 3) it fosters a sense of belonging as citizens of the earth [what he termed “earth-centrism”, p. 95]; 4) it makes people realise that interconnectedness among people is the true state of nature of humanity.

The main part of the text draws upon a meticulous analysis of primary and secondary sources. Haneda looks at the World History textbooks used in Japanese classes, such as the Shosetsu sekaishi B (Detailed account of World History B), as well as other major publications on the topic and the history curriculum guidelines devised by the Ministry of Education, Culture, Sports, Science and Technology (MEXT).

The book is divided into three main thematic sections discussing, first, the World History of today, second, the structural issues of World History as discipline, and, lastly, the new World History proposed by Haneda. In Chapter 1, he traces the development of contemporary World History from the 1940s onwards. Chapter 2 identifies the main problematics and it shows why the current type of World History is not enough. Chapter 3 introduces the two main responses to the issues discusses in the previous chapter, which have attempted to 1) depart from Eurocentrism and 2) to highlight commonalities and correlations. In the final chapter Haneda proposes his views on the new World History.

The only concern that I have about this otherwise clever book might be better expressed using the very words of the author: “when the future direction of the world is considered in earnest, it becomes obvious that a world history of the global community is an enterprise that must be accomplished at any cost” (p. 188). The risk of such propositions is to turn Haneda’s new World History into a teleology of the global community. Exchanging the idea of a global sense of community for either progress or the nation as the final goal of the long march of history. Methodologically, once again we are reproposed with the same issue of presupposing the existence of an historical phenomenon rather than critically question it.

Having said that, Professor Haneda’s book is a very important addition to de-westernise World History as a subject, which so far is still too heavily western-centric despite all its good intentions. Haneda also adds a critical environmental element to his vision of World History. I am not sure whether there will ever be a day in which the people of the world will ever be able to develop a common identity as “chikyu no jumin” (p.10), or citizen of the earth, but reading Haneda’s thought-provoking arguments I would really hope so. His vision of World History might not be perfect, but it surely is a good way to start discussing these difficult topics.