Of Arcs and Circles: Insights from Japan on Gardens, Nature, and Art 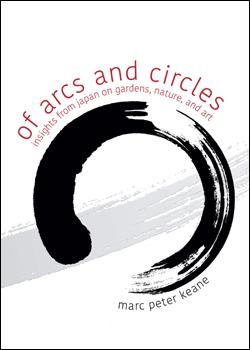 The title of this lovely book is somewhat misleading. Although I assume that it is literally true (i.e. that Keane was in Japan when he wrote it), it gives a prospective reader the impression that they are about to encounter some specifically Japanese socio-cultural-historical non-fiction: perhaps it will include a critique of different periods of Japanese art, or the history of the Japanese conception of nature? In fact, this is a collection of personal musings on Keane’s own life, his interactions with nature and culture and his observations on the wider world.

Keane is a successful landscape architect, artist and author who has been living and working in Japan for decades. He has written eight previous books, including an introduction to Japanese gardens, an explanation of the tea garden and a translation of the Sakuteiki with Jiro Takei. Those who have read 2002’s The Art of Setting Stones will be familiar with the style of Keane’s gently humorous prose and optimistic observations.

The essays in this collection range from the specific and tangible to the metaphysical, often in the same paragraph. A description of a momentary sight of a heron flying above the surface of a river leads to a discussion about symmetry in the natural world; seeing a house in the process of demolition leads to a critique of modern Japan’s approach to architecture alongside theories of transience, value and care. Keane’s conceptual wanderings are grounded in the real world so the reader is never left adrift; questions of existence are balanced by asides on topics such as the history of torii gates or the traditional methods of making charcoal. The quality of his writing makes it thoroughly enjoyable to follow Keane’s flow of thought from a woman on a subway platform to the best place to pitch a tent and onwards to the evolution of hunter-gatherer society, but I am left wondering what it must be like inside his mind, and if he ever just sees a thing as a thing.

Keane’s writings on culture and nature have the thoughtfulness which is surely only available to an outsider who can examine their surroundings with fresh eyes, unencumbered by habituation. Of course, this is an extremely knowledgeable outsider, and as such, his writing weaves deep understanding of Japan with his personal experiences to give a universal perspective which would appeal whether one has an interest in Japan or not. I particularly enjoyed the essay “there is no such thing as art,” which argues passionately for the need to return to craftsmanship, communication, beauty and emotional experience as the primary values of art.

Amongst the discerning and delightful of Keane’s writings, however, there are a few moments where he falls into the tempting rabbit hole of pseudo-philosophy. The scientist in me raised her eyebrows at a passage arguing for the supremacy of one state of matter over another:  ‘suspended in a dream of melting into the river… it occurred to me why there is such a strong connection between water and life… Solids are too fixed… Gases are too dispersed to be the foundation of life… Liquids on the other hand, offer the kind of density required for the development of an organism but also have the fluid nature that supports the various chemical and physical interactions from which life is born’. Forgive me for being literal but life on earth does fundamentally rely on all forms of matter; postulating otherwise detracts from the pleasure of his precise insights. Luckily, there are only a few moments that stretch credulity, which did not undermine my overall enjoyment of the book.

Although each essay is ostensibly on a separate subject, they are united by Keane’s desire to help us to see and value the connection between humanity and nature. With every phrase, Keane invites us to look at the world around us, and to look better at it. While admiring the beauty of a willow tree, he interrogates the failure of names to signify the complete reality of existence. In a discussion on Japanese poetry, he implores us to be aware of the deeper experiences available to us:  ‘the world holds these hidden messages by the bagful. It’s just a question of knowing how to look. Or, rather, to be willing to look. To be open to their revelations.’ Keane’s light-hearted accounts of the pleasure he gains from the world around him leads the reader gently towards a desire to look deeper, whilst avoiding condescension or evangelism. The threads running through the book come together in the final essay, where he elucidates his understanding of the Buddhist concept of emptiness: that ‘all existence is dependent on a web of interconnections’. Whilst admitting the near impossibility of it, Keane hopes that humans will one day learn  ‘to truly see the world as it exists with infinitely layered connections’. His optimistic message feels like the right one for our times: if we learned to understand the relationships that stretch from our single self to all other beings, the world would be a kinder place.