Japan's Love-Hate Relationship with the West 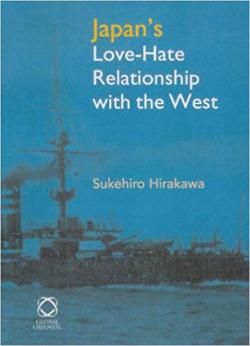 Sukehiro Hirakawa is Professor Emeritus at Tokyo University and has specialised in intercultural relations. He has taught at universities in France, North America and China. He translated Dante's Divine Comedy into Japanese.

Professor Hirakawa in a postscript (page 544) emphasises the importance "for Westerners to study not only the life and thought of the Orient but also to study those of the Occident from the Oriental points of view." This book is a significant contribution to this task. It is written in good clear English and demonstrates the width of the author's knowledge and cultural understanding. For anyone interested in Japanese literature and Japan's relations with the rest of the world this book contains much of interest as well as insights into a wide range of historical as well as cultural issues. It is dedicated "To the greatest of Japan interpreters: George Sansom and Arthur Waley."

I cannot in a brief review hope to draw attention to all the many fascinating articles in this book. Inevitably the following comments reflect my own interests and perhaps prejudices. Readers with other interests and attachments will no doubt become absorbed in other essays.

For me, one of the most interesting pieces in this collection was Chapter 2-7 in which Professor Hirakawa compares the autobiographies of Fukuzawa Yukichi and Benjamin Franklin. Hirakawa draws attention to the frank way in which both these great figures wrote and admitted "the part played by vanity in our lives." He concludes provocatively that if read in English Franklin's autobiography is the more interesting but if read in Japanese Fukuzawa's is "far more interesting." Certainly Fukuzawa's autobiography is a fascinating story and tells us much about life before the Meiji restoration.

Professor Hirakawa makes some cogent points about the impact of Western culture in Japan symbolised by the Rokumeikan (literally 'the deer cry pavilion'), designed by the British architect Josiah Conder, where at the height of the western cultural boom in the 1880s balls and fancy dress parties were held. The excesses of the westernisation movement led to an inevitable counter-reaction. Hirakawa notes (page 207): "how to mature in the society of nations is the problem of the Japanese in their dealings with others. Instead of indefinitely staying in their introvert stage of one-sided dependency, what the Japanese now must learn is how to build up effective networks of interdependence." In this context his essay on Akutagawa Ryunosuke's short story based on an account of a ball by Pierre Loti, the author Madame Chrysanthème is fascinating. Akutagawa's story (page 145) "suggests the transient nature of all human activities. The French naval officer mutters at the end of the evening: 'I was thinking of the fireworks. The fireworks, like our lives. '"

Professor Hirakawa often takes up the theme of racial discrimination. Uchimura Kanzo is upset by being thought of by Americans as a "Chinaman" but as Hirakawa points out his resentment was not just racial. He "resented being identified with manual labourers when he was the holder of an official position with the Japanese government (page 219)." Uchimura was also disappointed by how professed Christians behaved in America and by the "lock-and-key" culture he encountered there. In his article on The Yellow Peril and the White Peril Professor Hirakawa draws attention to Anatole France's Sur la Pierre Blanche published in 1905, which I regret to say that I have never read. He notes that Anatole France had "a strong sense of empathy for and psychological understanding of the oppressed underdog." Hirakawa traces these views back to Voltaire writing about relations with China in 1764. In this context he does not accept (page 237) the views of right-wing intellectuals who attempt to justify Japan's role in the war in Southeast Asia on the grounds that Japan's action led to the countries escaping from colonial domination. This was, he points out, the result of the power vacuum resulting from the expulsion of western forces from the area.

The essay on Natsume Soseki and the Scottish Australian historian James Murdoch (chapter 3-4) contains much of interest on both their characters. He thinks (page 266) that Sansom's verdict on Murdoch (Murdoch "presented Japan as seen through spectacles made in Aberdeen about 1880") was less than fair.

Most foreigners find the Japanese concept of haragei (literally 'stomach art' but implying the conveying of meaning without actually saying what you mean) difficult to understand. Professor Hirakawa's essay (chapter 4-1) entitled "Signals of Peace not received: Premier Suzuki Kantaro's efforts to end the Pacific War" provides an illuminating commentary on this problem.

Another fascinating historical essay is that on the English pacificist and scholar of Haiku "R.H. Blyth and Hirohito's Denial of the 'Divine' Nature of the Japanese Emperor (chapter 4-2)." This brings out the important role played by Admiral Yamanashi Katsunoshin, whom I only knew when he was in his second childhood, and demonstrates that the Imperial Rescript of 1 January 1946 with the words rejecting "the false concept that the Emperor is divine, and that the Japanese people are superior to other races and fated to rule the world (page 309)" was made on Japanese initiative and not imposed by the Americans.

The essays on literature especially on Arthur Waley, the Noh and Dante, but also on Mori Ogai are absorbing and informative.

It is a pity that in the essay (chapter 4-3) on prisoners in Burma Professor Hirakawa did not have the benefit of Phillida Purvis's account of the life and work of the late Louis Allen in Britain and Japan: Biographical Portraits Volume V, Global Oriental 2004. I also regret that the Professor in his comments on Rudyard Kipling does not seem to have been aware of Kipling's response to Japan as seen in his account of his visits to Japan (Kipling's Japan, edited by Hugh Cortazzi and George Webb, Athlone Press, 1988).

I have my doubts about the book's title, which is presumably deigned to attract attention but it is about much more than the title suggests.

This review was originally written for Asian Affairs.