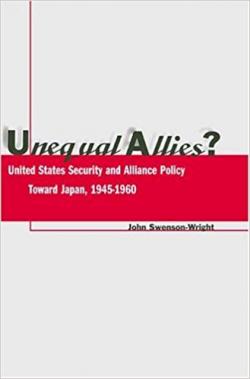 Dr Swenson Wright, who is Fuji bank Lecturer in Modern Japanese Studies at Cambridge University, has produced a carefully researched and scholarly study which sheds new light on one of the most important themes in modern Japanese history. His copious notes demonstrate the extent to which he has mined the archives. His comments are judicious and fair. He rightly emphasises that while individuals played important roles in the formulation of policies these generally resulted from a consensus and had to reflect the political realities which set the parameters of the possible.

Dr Swenson Wright, in his introduction discusses some of the general issues facing the historian including those posed by ‘preconceptions, assumptions and biases’ which are inevitably greater in discussing relatively recent events where some of the actors may still be alive.

The first chapter under the title ‘Neither Victors nor Vanquished’ is devoted to the theme of ‘Establishing the US-Japan Alliance, 1945-50’ and sets the agenda of the book. In it he underlines relevant aspects of the occupation of Japan about which a great deal has been published. The author rightly points up the key role played in the formulation of US policy towards Japan by George Kennan, the advocate of the containment strategy.

The second chapter ‘Negotiating the Peace and Security Treaties, 1950-51’ covers themes about which much has also been written. I was particularly interested in Dr Swenson Wright’s view of John Foster Dulles whose general record he defends.

The third Chapter deals with China Policy and the US Japan Administrative Agreement 1951-52 which was needed for the implementation of the US-Japan Security Treaty. This Agreement was a complicated one and was the model for the agreement on the Status of UN Forces in Japan in the context of the Korean War. The question of jurisdiction over US forces was a major source of contention. This is an issue which continues to complicate the stationing of forces overseas and has been the source of much friction between the US and Japan over the last half century.

The fourth chapter deals with ‘Okinawa, Nuclear Weapons and the Article III Territories’. The territories covered by Article 3 of the Peace Treaty with Japan were in essence the Ryukyus, Amami Oshima and Bonin Islands. The Article provided that the United States had the right to administer the territories pending a US proposal to place these under UN trusteeship. This chapter highlights the differences of opinion between the military and civilian officials concerned and the lack of sensitivity towards Japanese concerns and interests by the US Department of Defence.

The fifth chapter is devoted to ‘The Lucky Dragon Incident of 1954: A Failure of Crisis Management?’. The Lucky Dragon was a Japanese fishing vessel whose crew were subject to serious levels of radiation from a US hydrogen bomb test in the Pacific despite the fact that the ship was well outside the exclusion zone. As the author points out: ‘Public reaction in Japan was one of anger at the US government and its apparent failure to give adequate consideration of Japanese grievances.’

The final chapter entitled ‘Rearmament, Security, and Domestic Politics, 1953-60’ discusses the arguments and events leading up to the revised Security Treaty of 1960. This includes an account of the steps which led to the resumption of diplomatic relations with the Soviet Union and of the sometimes devious manoeuvrings of Japanese politicians. I had not realised until I read Dr Swenson Wright’s account here that Matsumoto Shunichi, Japanese Ambassador in London and chief Japanese negotiator with the Soviet government, had ‘knifed’ his Foreign Minister Shigemitsu Mamoru by deliberately leaking to the press the fact that Shigemitsu was contemplating a deal on the Kurile islands by ceding Japanese sovereignty over the islands of Etorofu and Shikotan. He also showed his disloyalty by sending telegrams to Japanese politicians about the way Shigemitsu was ‘botching’ the negotiations.

I must take issue with one aspect of Dr Swenson Wright’s account in the third of the events leading up to ‘Yoshida letter’ written in late 1951 in which Prime Minister Yoshida committed Japan to recognizing the Chinese Nationalist regime in China. The author notes (page 94) that according to US Senator Smith Yoshida, the Japanese Prime Minister, ‘pointed out that Britain recognized Communist China and wanted Japan to ultimately do the same, and Britain also desired to keep some of East Asia as its own hunting ground for trade and therefore wanted the Japanese to trade with Communist China and not interfere with the British in southeast Asia.’ This statement strikes me as an example of Yoshida-speak designed to appeal to US anti-colonial sentiment. Dr Swenson Wright comments as follows: ‘British protestations of concern for Japan’s independence were at odds with the powerful evidence that Dening [Sir Esler Dening, the British Head of Mission in Japan from 1951] had been actively pressuring Japan to recognize Communist rather than Nationalist China’. I was a very junior officer in Tokyo at that time, but I do not recall seeing papers which suggest that Dening did apply any such pressure in his meetings with Yoshida following his arrival in Tokyo in October 1951 as head of the UK Liaison Mission to SCAP (and after the Peace Treaty came into force in April 1952 as the first British Ambassador to Japan post-war). I recently had occasion to look at the records in the Public Record Office of Dening’s limited conversations with Yoshida at this time and saw nothing to confirm this allegation. Dening had, of course, advocated British recognition of the Chinese Communists but this was in accordance with the accepted position of the British government that recognition did not imply approval of the government so recognized but only that it was the controlling authority. Dening’s main concern was, I think, that the Japanese Government should not be forced to extend recognition to the Nationalists in China against their long-term interests and should be free to make up their own minds. He felt strongly that Dulles had deceived him and the British Government. If anyone thought (and I do not recall any evidence of such a belief among my colleagues) that the British could hope to keep for themselves markets in South East Asia for long, they were being unrealistic. Indonesia was a target market for the Dutch and Indo-China for the French. This left, apart from Thailand, only Burma, Malaya and Singapore for the British. But in 1951, as I know from serving on the staff of the British Commissioner General in Singapore, our main concern at that time was to get enough food, particularly rice, to feed the populations of the territories which had been occupied by the Japanese. The British were also active in promoting the Colombo plan which they saw as a way of helping the territories to recover.