The Call of Japan: A Continuing Story - 1950 to the Present Day 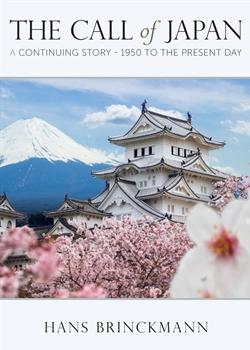 Confessions for starters. For decades I would see Hans Brinckmann in the lobby of the apartment block in Mita but we rarely exchanged much more than a perfunctory nod and a mumbled "good morning". Now at last there is the opportunity to make up for lost time and learn a great deal about an international banker, strikebreaker, actor, author and political commentator as he relives his long years in Japan. All this thanks to The Call of Japan. Hans Brinckmann's memoirs, despite a title with a slight Victorian echo that conjures up the determination of medical missionaries and university lecturers to enlist in the West's initial modernization schemes, are frank, detailed and highly readable.

As is invariably the case with autobiography the early years prove the more interesting. Readers, while following Brinckmann's progress from raw apprentice to banking boss, will also inevitably find themselves comparing their own experiences against those of the young Dutchman. Few, though, will be able to recall an arrival in Japan as early as 1950 when the country was still under Allied, largely American occupation. Fewer still will have spent most of the ensuing decades right up to 2020 looking so carefully and fairly as the nation picked itself up from widespread poverty and moved on to an enviable affluence. In the process Brinckmann worked both hard and successfully at his adopted profession and yet found the time and energy to closely identify with numerous aspects of Japanese culture. His heart was to remain in the Kansai, though the requirements of international finance brought him necessarily to Tokyo.

First-hand accounts by Western authors on the postwar transformation of banking and high finance are considerably rarer than those telling of the more traditional of Japanese arts. It follows, therefore, that Brinckmann's sections on what he sees as the 'secret' (p. 156) of the nation's success from the 1960s onwards deserve respect. By then, he reckons, ‘[t]here was no question about it: Japan was on its way to greatness’ (p. 157).

Yet there have been and still remain endless explanations from both within and without on how the nation raised its game and evolved so rapidly into the near top rankings of the premier league. For Brinckmann ‘Japan's demonstrated strength was not to be found only in quantifiable techniques, which could be copied, as indeed they increasingly were'. Japan was no 'ordinary country'(p. 156). Instead he prefers the cultural view that  ‘their whole attitude to work, life and society differed fundamentally from ours’, insisting that Japanese ‘egos were not allowed to get in the way of collaborative effort and the pursuit of handed-down objectives’ (p. 156). From his early occupation-era beginnings Brinckmann saw ‘clear national objectives to guide the business world and the workforce’ (p. 157), though he does slightly change his tune when it comes to the nation's predicament in the 21st century.

While Brinckmann does, indeed, discuss what it must be said is a somewhat well-rehearsed listing of Japan's ‘fundamental problems and vulnerabilities’ (p. 273) in his concluding section, the core of his work is more personal than political. It is inevitably the view based on both his successful personal career and a fulfilling, if decidedly nomadic, family life with moving descriptions of both his mother-in-law and his wife Toyoko, to whom he was married for nearly half a century. The account of her last illness and the funeral services is particularly moving.

Doubts about Japan's future, however, are not the author's main concern. Equally, his criticisms of what might almost be termed his adopted nation rarely get in the way of a generally positive and graphic, chronological portrait. Brinkmann places most attention on his first two decades in Japan from starting out in 1950 to the celebratory Expo 70 and Mishima Yukio’s bizarre suicide.

It was in these earlier years that Brinckmann first produced what he slightly grandly calls Japan's positives and negatives. Prompted, perhaps, by his banking background, he deploys the equivalent of his personal slide rule to chart what is almost literally a national balance sheet on Japan's successes and failings. Most expats never actually get round to putting this type of examination onto paper, though such comments come up frequently in casual conversation with friends in the office or faculty room at the end of a particularly tiring working day.

Brinckmann, professing what is, of course, an impossible objectivity, decided to carefully analyze ‘Japanese traits, habits and realities’ (p. 215). It is a mixture of recent history, social anthropology, aesthetics and personal foibles that he may not have greatly altered in later years. He made it immediately after shaking the ‘clammy, grasping and hasty’ hand (p. 214) of Prime Minister Tanaka Kakuei when paying a courtesy call with his American superior - it seems to have been at least one reason behind the author's wish to quit Japan in 1974. Needless to say, the draw of the country would bring him back regularly on business and family trips, before he returned permanently in 2003.

At times he would indeed report on the nation's faults, calling it a ‘twisted country’ (p. 207) with  ‘a suffocating web of social obligations and rituals’ (p. 206) , but his criticisms were generally outweighed by his respect for its 'solid social foundation' p. 300). His kaleidoscopic memoirs include everything from calls on the renowned potter Hamada Shoji and two visits to the Yoshiwara before it finally closed its doors, plus serious attention to Zen, squash at the British embassy’s now lost court, endless mega-receptions, as well as fast footwork in order to get round financial red tape and a polite interrogation for residential infringements.

Hans Brinckmann has clearly made the most of the opportunities and challenges that came his way, concluding with a deep bow for 'Japan's generally caring, non-violent, balanced way of life' (p. 302). The Call of Japan, packed with photographs, would make an ideal gift for the approaching Christmas and the New Year seasons.

To obtain your discount, please download the promo flyer here (word document). Please follow the instructions in the flyer and remember to quote the discount code: 13JAPAN.