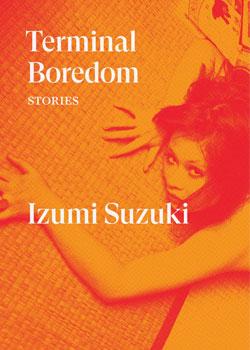 Suzuki Izumi, born in 1949 and taking her own life in 1986 at the age of thirty-six, seems in many ways the very definition of a cult figure. Both a countercultural icon and genuinely pioneering figure in Japanese literature, she would initially find fame as a model and actress before securing her reputation as a writer.

This collection of short stories was originally released in Japan as Keiyaku: Suzuki Izumi SF Zenshuu (Covenant: The Complete Science Fiction of Suzuki Izumi) and you have to wonder whether with the cover art and re-titling to Terminal Boredom used in this English release, there was a desire to play down the science fiction aspect in favour of a more general 'quirkiness' that would fit into the broader English language market for what Japanese fiction represents right now. The insides may stay the same, but the wrapping - in a way - makes all the difference. There have been many excellent volumes of Japanese short stories in translation released recently - Murakami Haruki’s First Person Singular and Nakajima Kyoko’s Things Remembered and Things Forgotten chief among them - Suzuki Izumi’s collection however, is without a doubt one of the strangest.

Taken as a whole, Terminal Boredom comes on like a high-intensity cocktail of distinctly bizarre tales that invariably, through a particularly slanted, satire-driven look at issues of gender, sex and drug use, force us to see the familiar from new, compelling angles. A New York Times review drew an apt comparison between Suzuki and Ursula K. Le Guin; and certainly, stories like ‘Women And Women’ - the first tale in this collection, and also arguably the best - feel very much a pair with classics like Le Guin’s 1969 masterpiece The Left Hand of Darkness.

In ‘Women And Women’, the science fiction “concept” is front and centre, inescapable. Pollution has caused the male birth rate to decline dramatically. Men are now incredibly scarce - seen more like livestock than genuine humans - confiscated immediately on the rare occasion one is born. What remains is a ‘queer matriarchal utopia’ populated solely by females - most movies and books from the time before are banned, and the only image of masculinity most women now receive comes from the uber charming heroes of still-permitted shojo girls manga. Many women now imitate these characters, while exchanging rumours of men being able to somehow make women pregnant through the ‘radiation’ they emit.

One of the most fascinating aspects of this collection - ably handled by six different translators - is that each story feels like a kind of experiment; parameters tweaked, altered, and then a scenario allowed to play out. The resulting dramas, often small-scale and character-driven in nature, are all the more impactful because they force us to consider the ramifications of their science-fictionality on a personal level. In the genius ‘Night Picnic’, the last family in a desolated city must learn to be human by awkwardly appropriating popular culture. In a bizarre combo of keeping-up-with-the-Joneses aspiration and oddball sentences that almost look like typos until you realise they are the characters falling over themselves linguistically, we laugh at all those silly things that used to make up human “society”.

The collection’s tone veers unnervingly between the comic and the contemplative, punctuated from time to time with punky, expletive laden volleys - the swearing in particular feeling so at odds with what we are typically used to in English translations of Japanese literature. When the science-fiction concepts are dialled up to 100, things can even veer on the anime-esque. The “Gender Exclusion Terminal Occupancy Zone” in the first story immediately springs to mind - a kind of zoo for men, complete with high school field trips to stop and stare at these strange creatures.

At other times, the outcome is more pensive - snippets of veracity that hold up a mirror to all worlds and all realities. The reader is a tourist through these strange vistas, but we are invited to question and critique at every juncture. Gender and gender roles remain constant themes, the titular story - which closes out the collection - offering a particularly incisive vignette:

The kind of men you see in the movies would be hard to handle in real life, though - they’re so fixated on their own masculinity. And sometimes that male pride, that proper behaviour, it all starts to seem ridiculous. If they could just get over themselves, then everything might be a whole lot simpler.

Is it powerful feminist literature, or is it complex, geeky sci-fi? In truth, it’s both - simultaneously and all at once - this combinatory existence becoming a merry-go-round of thought-play that continuously prods at the most ibewildering aspects of humanity. Suzuki’s writing is a 20th century Gulliver’s Travels through a weird multiverse of oddities, the satire biting with a sharpness that asks us to stop, consider, and then re-consider.